News - Topowa! Never Give Up 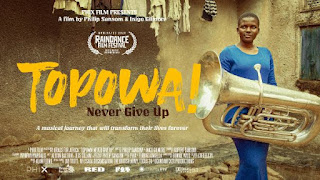 The Brass for Africa documentary film 'Topowa! Never Give Up' has been officially selected for Raindance Film Festival and has also been nominated for Best Music Documentary...
Press Release
'TOPOWA!' is an inspirational journey of 12 young teacher musicians, from the dusty dirt roads of Katwe slum to the paved streets of London and the fields of Cheltenham Festival. The documentary features the Brass for Africa musicians as well as jazz legend (and hero to many of the musicians) Wynton Marsalis, together with British virtuoso trumpeter Alison Balsom and saxophonist Jess Gillam.

“The type of humility & respect they have is inspiring. I want all my young people around the world to always be empowered, wherever we come from.” - Wynton Marsalis

Director Philip Sansom was delighted with the news about TOPOWA!'s nomination. “Seeing the incredible work the teachers at Brass for Africa do first hand was inspiring and hearing the stories of these young musicians was life changing. We knew that making this film was simply something we had to do. When Sumayya used the word TOPOWA! in her interview her we asked her what it meant and we knew we had found our title. Never Give Up is such a positive message that resonates across the world today and it was our pleasure to be part the this journey, in creating a film with real heart, joy and positively to delight audiences as well as to make them think. Our hope was to raise awareness for the charity but also to use our voices as film makers and as a production company to inspire positive change.”

“Being selected again for the 2nd year running at Raindance is fantastic. To be nominated for Best Music Documentary this year is a real honour - having come from making music videos, to now having a feature length documentary at this festival has been a career ambition. Whenever you make a film you hope there will be an audience for it and to be nominated is a really great show of support for the project and story, it feels great after all of the hard work to know there is such a well respected platform behind us and we can start sharing the film with a wider audience.”

Topowa! Never Give Up will have its UK Premiere at Raindance Film Festival on 28th October.

The Raindance Film Festival will safely adapt to an online experience for its 28th edition and will take place between 28th October - 7th November 2020.

The film is Directed by Philip Sansom & Inigo Gilmore Produced by Rupert Sansom and was created in association with Brass for Africa Sound Design by Bonnie Wild (Skywalker Ranch) Post-Production by Coffee & TV.