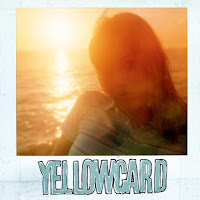 In an effort to further her musical education, Susan Omand has been set "homework" of listening to albums released after the 1980s that she has missed out on. This week she heads down Ocean Avenue...
Find the full list of albums for Educating Omand: Year 3 here
As with most things #EducatingOmand has thrown at me, I had never heard of Yellowcard before so set forth to listen to this album with very few preconceptions and even fewer expectations. For the first half of the first track, Way Away, it kind of lived down to the very low bar I had set being somewhat wallpapery pop punk … and then the fiddle kicked in.

You know when you go to a restaurant that promises “fusion” food of two totally diverse and unexpected cultures (for example Thai spiced haggis) it can either really work, or really not. This is a fusion that REALLY works. It’s, yes, pop punk but the traditional Celtic folk violin threads are so on point that they really elevate the album to a whole new level. The next track Breathing is pure Green Day crossed with the Chieftains and is stunning stuff. The title track, Ocean Avenue, leans more towards rock music, making sense of it being a choice for a single, with frenetic drums and good twangy guitars but there’s still that fiddle arpeggio riff undercutting the chorus adding to the richness. Empty Apartment is a beautiful acoustic folky ballad with a singalong chorus augmented by a marvellously muddy electric guitar and legato bowed violin. Life of a Salesman kicks the tempo right back up with a Thin Lizzy-esque crowd pleaser that will set feet tapping and live audiences bouncing. Only One is slower again with interesting vampy keys added to the tapestry of instruments and is another of the singles from the album, which figures as it’s not as folky as some of the other tracks although I love the crackly record ending to the track. Miles Apart settles back into solid rock music with excellent percussion and chugging guitar in the intro that are very Psychedelic Furs’ Pretty in Pink (by no means a bad thing in itself) but again the sparkling tones of the violin dance over the top and lift it to something really special. Twentythree is next with a heavily hectic backline highlighting the vocals of singer Ryan Kelly without the need for other instruments to carry the tune, the violin this time is a nice addition but not necessary for a good song. Then we get some bluegrass. Honestly, View from Heaven is proper downhome country music, just with a heftier drumkit and is a total bop. The chorus is so catchy too:

Inside Out is next and reminds me so much of something else but I can’t put my finger on it, it’s still a solid rock song though and the siren like violin counterpoints the weight of the bass nicely. Believe puts the violin front and centre for its intro and it is a glittering start with elbows akimbo for another foot tapper. The surprise samples of emotive political speeches really worked well in it too. One Year Six Months is the penultimate song on the album and is an acoustic folky upbeat ballad that is so Green Day it hurts. The album closes out as it starts with a nice laidback pop punk track, Back Home that, after the highs of the rest of the album, feels like a bit of a comedown but the lyrics reflect that too so the emotional dip works thematically.

Well, Mr Ames, thank you. And yes you can certainly call me educated this time; I was NOT expecting that. It’s soooo good. I don’t know who plays the fiddle on the album [on checking Wiki – it’s a guy called Sean Mackin – Ed] but they are brilliant at it and could fire up a crowd at a ceilidh easily. I will be looking for more.