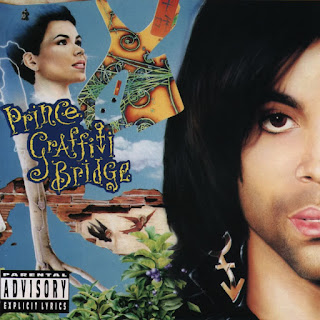 So many well-known albums turn 30 this year and Steve Taylor-Bryant and Susan Omand travel back to 1990 to revisit some of the sounds of their youth that made parents shout "Turn that noise down!" This week, Susan looks back over Graffiti Bridge...

If you know me at all, you know that I’m a Prince fanatic and have been for a long time [a long, long, long time! – Ed], however Graffiti Bridge isn’t an album that’s been on my playlist too regularly and, listening back to it now, I’m not really sure why that was. Maybe it was an age thing… it’s taken me a while to get into the funk/R&B sound that this album is full of and, back at the time it came out, that sound was everywhere and this album kind of got buried in the melee for me.

However, the benefit of hindsight shows me that Prince, of course, put his own twist on things and Graffiti Bridge really is a musically fascinating album when you actually take time to listen to it. There’s an acid jazz feel and superb percussion to Release It, hippy drums and harpsichord in Elephants and Flowers, cinematic strings, xylophone and naff lyrics in Graffiti Bridge. Can’t Stop This Feeling I Got reminds me so much of Footloose and New Power Generation Part 1 sprinkles in some added fairground organ and gospel choir because of course it does. Where Love Machine drowns out Elisa Fiorillo’s vocals with far too much electronica and percussion (and a dialling trimphone), Round and Round really showcases Tevin Campbells voice as there is minimal musical accompaniment but, vocally, they are both knocked for six when we get to the venerable Mavis Staples’ singing in Melody Cool.

Graffiti Bridge is really a soundtrack album for the ill-fated film of the same name [I mean, why did they think that Purple Rain needed a sequel, really? – Ed] but, thankfully, it stands very well on its own, although it is not a patch on his Batman soundtrack. However, now that I’ve heard it again, I’ll definitely give it more house room. Picking a favourite track is difficult though, because there’s two that stand out for me; the wooziness in the introduction of Still Would Stand All Time is superb but I think The Question of U just edges it for me. Cue goosebumps and tears.