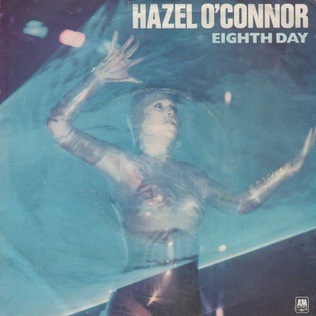 Inspired by our series of articles looking back at music released 30 years ago, Jimmy Hunter takes a step further back in time to give us a Song of the Day 1980. This week, he's counting the days...

I remember dancing to this at the end of (1981 summer) term disco. Or was it the summer 1980 disco and I’m getting mixed up? [I don’t care, get on with it – Ed] I definitely remember pogoing to White Riot and Into The Valley. Maybe I’ve imagined the whole thing? [*stares* - Ed]

I also remember being utterly captivated by her performance on Top of the Pops. The frown, the wide/wild staring eyes and the shaking … yes, this week dear disciples, we are cowering in the corner at the thought of Hazel O’Connor’s Eighth Day prophecy coming true.

And what a debut doomsday record this. From the film Breaking Glass, in which she starred, this self-penned record took her right into the top 10 and is a perfect example of how varied the UK chart was at the time. It wasn’t all cheesy pop and post-disco disco. No, not at all.

Aping the Book of Genesis into a modern dystopian horror, O’Connor very deftly narrates her way through a machine controlled world where the machine goes out of control. We know how this will end. Hmmm. Seems familiar – have we not learned anything? She does this with superb lyrics (“neon brights the light abhorring nights”) and a fatalistic backing track.

The style is very much new wave as there’s good use of early synths to create a scary industrial type background that has no joy. And there’s no let up either. The bass is constant, there seems to be a rush to get to the end point and she key changes rather cleverly in the chorus in order to emphasise the terror. There may not be much joy in the world she’s created but there is much joy for the listener.

I always felt and I still do, that Hazel O’Connor is a very much underrated artiste. Writer, singer, performer she disappeared into the background quickly but remained very active and is still performing. Along with Lene Lovich and Toyah, she’s part of a very small group of female punk/post-punk/new wave artists that never seemed to quite achieve the fame and or reputation of a Siouxsie Sue but definitely have carved out their own legacies and sounds.