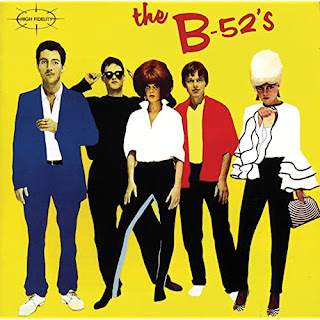 Inspired by our series of articles looking back at music released 30 years ago, Jimmy Hunter takes a step further back in time to give us a Song of the Day 1980. This week, he cries Give Me Back My Man...

I’ve long been a fan. But having thought about this record my first instinct was that this wasn’t what I was listening to in 1980. Yet this was something that among all the post-disco-pre-new-wave stuff, kind of stood out. This week, dear lobsters, I’m rocking with the B52’s!! See what I did there? [Yes and I’m ignoring it – Ed]. And I’m listening to Give Me Back My Man.

This is a cracking record that never really saw the light of day in the UK but has stuck in my noggin all this time, much like some of the other stuff I’ve been scribbling about. The album it came from merely grazed the UK top 20 album chart and the single didn’t even make the top 60. However, fresh form the success of “Rock Lobster”, the band had amassed a strong fanbase. Most people, however, may only remember the band from the 1989 hit, Love Shack.

Right from the off the bassline courtesy of Ricky Wilson* (a teenage heartthrob for me!!) thumps you into submission and your foot starts to tap. The keyboards pick up the melody and Ricky’s sister, Cindy, enters with a voice that may not be unique, but is very distinctive. It’s also deceptively strong. Her voice though, combined with the overall production and the way the band composed their songs, produces in my ear at least, a very unique sound and one that’s been used as an influence, shall we say, quite often.

The lyrics are fascinating (they all are). To have been in the room with them whilst they were writing this stuff must’ve been a joy:

A great record built on a solid musical base, not over-produced or over thought and with a strong melody all the way through. Some things aren’t improved on over time. Yet some things age unbelievably well with the passage of time. As this record has done just that.

Judge, dear lobster, for yourself:

*Ricky Wilson died of AIDS related complications in 1985 and the band, overcome with grief, had a self-imposed hiatus for several years as a result
Image - Amazon
Email ThisBlogThis!Share to TwitterShare to Facebook