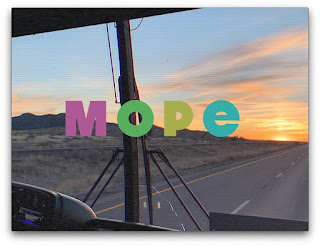 From the forthcoming 20th anniversary re-release of their self-titled debut album, Susan Omand suggests you listen to Wheatus' latest single, Mope...
Oh come on, you remember Wheatus. So much more than the one hit wonder band many would have you believe, having released their mega track Teenage Dirtbag 20 years ago now [TWENTY?! I feel old - Ed] the band have been working pretty solidly over the past two decades, touring and releasing new music ever since. There's an extensive back catalogue to listen to, so it's your own fault if you haven't been keeping up with what they've been doing.
Anyway, Mope is one of the previously unreleased "Lost Songs" from back in the day and was written by front man Brendan B Brown. Says Brendan, “We found demos of about 10 songs written alongside the tracks that made the album, but they didn’t get finished. Looking at them now, they feel surprisingly fresh and deserving of a proper chance to be heard. So we’ll have a brand new 20-song version of our album on its 20th anniversary.”
The video for the song was made by Joey Slater and is comprised of photos and footage taken by members of the band in the studio and on the road, mostly over the last 2 years. As one of the comments on last night's YouTube premiere of the single said, "It sounds like the theme tune to a sit-com" but I tell you this, if it was a TV theme, I'd definitely watch the show on the strength of it. As soon as I heard the song, I was bopping around like the middle-aged dirtbag I am and I'm looking forward to hearing the whole album soon.


Mope is available as a single with Teenage Dirtbag 2020 on all streaming services from today. You can also get a free download of MOPE and Teenage Dirtbag 2020 with your purchase of a limited edition "Dirtbag For Life" shirt, currently up for pre-order at wheatus.com/store.
Image - Wheatus Instagram
Email ThisBlogThis!Share to TwitterShare to Facebook