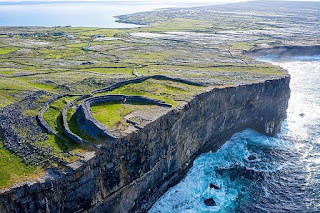 Taken from the forthcoming album Good Luck, Seeker, which is out later this month, The Waterboys have released a new song Postcard From The Celtic Dreamtime...

The hauntingly atmospheric ‘Postcard From The Celtic Dreamtime’ showcases the spoken word nature of the second half of new album Good Luck, Seeker, the lyrics describe an elemental land and seascape.“It’s a poem I discovered in a box of old writings,” explains Scott. “The first line is “The storm that has howled for four days has blown itself out.” It describes the world I found at the end of Ireland, where I went to escape the pressures of the modern world and finish ‘Fisherman’s Blues’ thirty years ago.”

The track, underpinned by a shimmering beat and shapeshifting musical soundtrack, unites The Waterboys’ past and present and is accompanied by a beautiful aerial video tracing the spectacular coastline of the Aran Islands which are mentioned in the lyric. The aerial footage was shot by band member Steve Wickham and edited with his son Tom Wickham.

‘Postcard From The Celtic Dreamtime’ follows the recent release of the band’s current upbeat pop single ‘The Soul Singer’, the mysterious ‘Low Down In The Broom’ and the epic ‘My Wanderings In The Weary Land’, all of which preview one of the most remarkable albums in The Waterboys’ career.

Here's the lyrics for those interested in the poetry of the song:

From my window I watch far waves
crashing on the bay
white spray against black sea
distance compressing their dance into slow motion
On the Clare coast I see silver rounded hills
with scarped terraces
a martello tower, a ruined fort
four, maybe five headlands fading south
while westwards the Aran Islands wait for me
dark smoke-like shadows on the horizon

Pantheons of clouds move across the Atlantic sky
like ships, white galleons
chariots or cavalcade of noble kingpins
and patient, lofty queens
slow procession of old gods passing by

Below my house kaleidoscope of stone walls
and huddled rooftops
small haphazard fields, wild, untended
a witch-faced woman walking cows uphill
whacking their arses with a long branch
suddenly smiling when she sees me
a rough arm waving