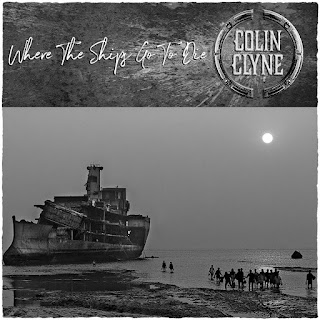 Where The Ships Go to Die, the latest single from award winning Scottish singer songwriter Colin Clyne is out today. Have a listen...

Aberdeen based Alt-Folk singer-songwriter Colin Clyne has a remarkable way of cutting straight through to the heart of his listeners’ emotions. With a passion for songwriting, Clyne's story-like lyrics and original melodies expose a truly sensitive artist whose unique vocals have the power to provoke a profound response.
When asked about the story behind the new single Clyne said “...I’ve spent many years working on boats. Where The Ships Go To Die was born from such a trip, where I happened across scores of boats and vessels lying on beaches. Holes in their hulls, diesel spewing from their tanks, battered, broken and abandoned. These ships had no future, no hope, devoid of the safety, strength, buoyancy, independence and serenity we associate with ships. Friendship, family and love are also a haven for the heart. If we don’t care for them, maintain them and respect them through the storms of fragility of these unprecedented times they too may end up dead and abandoned on a beach like those ships…”
‘Ships’ is a follow up to Clyne’s critically acclaimed album The Never Ending Pageant which reached #6 on iTunes Country album charts and Grammy award winning engineer, Alan Sanderson returns again this time on production / engineering duties. The cover art for ‘Where The Ships Go To Die’ is a soul-stirring photograph from award winning National Geographic photographer, Saiful Huq Omi from Bangladesh. The single will kick off an exclusive first airplay with Keith Greentree of BBC Radio Norfolk.

Where Ships Go to Die is available now on all top digital platforms via Royale Music/INgrooves.
Image - Saiful Huq Omi
Email ThisBlogThis!Share to TwitterShare to Facebook