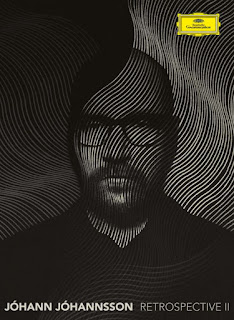 Icelandic composer Jóhann Jóhannsson was at the height of his creative powers when he died suddenly in February 2018. His legacy lives on, however, through his catalogue of recordings, which encompasses everything from evocative compositions for small ensemble to strikingly original film soundtracks.

Retrospective II, set for international release by Deutsche Grammophon on September 18th, 2020 – the day before what would have been the composer’s 51st birthday – pays further tribute to one of the most distinctive voices in contemporary music.

Complementing the April 2019 release of Retrospective I, which included such seminal works as The Miners’ Hymns, Copenhagen Dreams and Free the Mind, this second and final volume offers a wide-ranging selection of Jóhannsson’s multi-award-winning film scores and influential studio albums. Presented as a limited edition deluxe hardcover book, it comprises eight CDs and a bonus DVD of his 2016 “Live at Funkhaus Berlin” concert. It also contains rare photographs of the composer, as well as two new essays by John Schaefer and Wyndham Wallace that provide insights into Jóhannsson’s life and his aesthetic outlook.

Retrospective II spans the remarkable inventive range of Jóhann Jóhannsson’s multi-award-winning film scores. First on the list is his Golden Globe-winning and Oscar- and Grammy-nominated soundtrack for James Marsh’s Stephen Hawking biopic The Theory of Everything (2014) which, as the composer himself noted, reflects Hawking’s “zest for life” as well as a sense of nostalgic melancholy.

Also included are Jóhannsson’s groundbreaking compositions for two films directed by Denis Villeneuve: the action-thriller Sicario (2015) and science-fiction drama Arrival (2016). The former score, it too nominated for an Academy Award, picks up on the dark and violent atmosphere of the film, blurring the line between acoustic and electronic sounds. The Arrival soundtrack, meanwhile, mirrors the theme of communication explored in the film, using strands of real and altered voices to form a thread that runs throughout. The score was nominated for a Golden Globe and a Grammy, and is enhanced here by the addition of two previously unreleased tracks. “Arrival built bridges with the unknown and Jóhann’s sounds definitely help create that illusion,” says Villeneuve. “I cannot imagine Sicario or Arrival without his music.”

The last film score included here was written for The Mercy (2018), again directed by James Marsh, an account of Donald Crowhurst’s doomed attempt to sail solo around the world. Jóhannsson’s music intensifies the portrayal of a man’s gradual descent into madness in a story that fascinated the composer because it recalled “the heroism and hubris you find in ancient myth”.

The soundtrack for The Mercy combines new music with tracks from earlier albums, including Jóhannsson’s first solo album Englabörn and his critically acclaimed Deutsche Grammophon debut, Orphée (2016), both of which are included on Retrospective II, as is Englabörn’s companion piece, Englabörn & Variations (2018). Fifteen years after the release of Englabörn, described by Pitchfork as sixteen miniatures transformed into “an exquisite listening experience”, Jóhannsson decided to not only remaster the album but also to rework several of its tracks. Friends and colleagues such as Ryuichi Sakamoto, A Winged Victory for the Sullen and Hildur Guðnadóttir added their own reworkings to create a series of reflections on a landmark of early 21st-century composition.

As for Orphée, it was inspired by versions as different as Ovid’s and Jean Cocteau’s of the ancient story of the poet Orpheus, a myth that can be read as a metaphor for artistic creation. The album is presented here with three additional and previously unreleased tracks, including a new reworking of “Flight from the City” by Jóhannsson’s friend and collaborator Víkingur Ólafsson. These three tracks, together with the two new pieces from Arrival, will be released as a digital EP on the same date as Retrospective II, September 18. As part of his European tour of Orphée, Jóhannsson performed at the Funkhaus in Berlin in December 2016 with the musicians of Echo Collective. The film of that concert is released for the first time as a bonus DVD with Retrospective II, and will also be released digitally on September 18th.

The final album in this volume is 12 Conversations with Thilo Heinzmann (2019), a twelve-movement string quartet inspired by the composer’s conversations about art, politics and more with Berlin-based artist Thilo Heinzmann. It is performed by members of Echo Collective, who were invited by Jóhannsson to help him realise a definitive version of the work. After his sudden death, however, they were left to base their performance decisions on the conversations they had had about the quartet and their previous experience of performing the music from Orphée with him.
Retrospective II documents the work of a pioneer among contemporary composers, one who freely crossed boundaries between genres and different artforms. Jóhann Jóhannsson’s compositions embrace everything from minimalism and drone basses to electronic and classical orchestral sounds to create a deeply personal musical language. “My music is a way of communicating very directly with people and with people’s emotions,” he observed. “I try to make music that doesn’t need layers of complexity or obfuscation to speak to people. Music should resonate with them on an emotional level – simply and directly.”