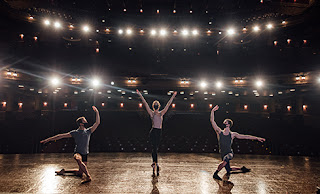 Edinburgh International Festival has unveiled My Light Shines On – a series of video works and light installations across Scotland’s capital to mark the beginning of the festival season and celebrate the enduring spirit of the Festival City...
Browse the whole Programme for this year's EIF here
Press Release

Through a series of digital commissions, the Edinburgh International Festival is partnering with Scottish artists and national arts companies, spanning the worlds of theatre, music and dance, to film original performances in venues including the Edinburgh Festival Theatre, The King’s Theatre, Leith Theatre, The Hub, Usher Hall and The Queen’s Hall. All films premiere on Edinburgh International Festival’s YouTube channel on Saturday 8 August at 9:30pm.

The films include a personal love letter to Scottish theatre from the National Theatre of Scotland, directed by award-winning filmmaker Hope Dickson Leach and co-conceived with National Theatre of Scotland Artistic Director Jackie Wylie and dramaturg Philip Howard, along with Scottish Opera’s modern-day interpretation of Gian Carlo Menotti’s The Telephone, starring Soraya Mafi and Jonathan McGovern, filmed in the bar of the King’s Theatre.

My Light Shines On also features an outdoor light installation in which Edinburgh’s festival venues, including the Usher Hall, Edinburgh Festival Theatre, Bristo Square and the Castle Esplanade, are illuminated by hundreds of beams of light, reaching up into the night sky. Each venue will also be lit from within by glowing lanterns, which shine and pulse behind closed doors, celebrating the people and artists who play a key role in the festival community. Scottish lighting designers Kate Bonney and Simon Hayes have been commissioned to design the project. As the beacons of light are visible from across the city, Edinburgh residents are encouraged to view the spectacle from their windows or a high vantage point, staying within government distancing guidelines and without gathering in crowds.

On Saturday 8 August 9:30pm, a one-hour gala film hosted by journalist and TV presenter Kirsty Wark and cellist Su-a Lee previews the My Light Shines On activity. This specially commissioned production is premiered on BBC Scotland TV and the International Festival’s YouTube channel to mark what would have been the opening of the 2020 festival. The film features famous faces from festivals across the years, collaborations with Edinburgh Festival Fringe, Edinburgh International Book Festival and The Royal Edinburgh Military Tattoo, showcasing Edinburgh roles as the Festival City.

From 10–28 August the activity continues with a chamber music soundscape in Princes Street Gardens each lunchtime from Monday to Friday. Each 40-minute specially recorded chamber music performance will be audible throughout the gardens, allowing socially distanced audiences to enjoy the music whilst having a picnic or taking a walk. Artists will include Mark Padmore, Angela Hewitt, Dunedin Consort and the Hebrides Ensemble. Videos of the full concert series, recorded behind closed doors in The Hub, will be released on the Edinburgh International Festival YouTube channel. Highlights from the concert series will be broadcast on Classic FM in a special edition of The Classic FM Concert with John Suchet and streamed on the station’s Facebook page.

The Edinburgh Festival Chorus features in the International Festival’s summer activity with a brand-new recording of Carl Orff’s Carmina Burana. From their own homes, over 120 chorus members have rehearsed and recorded their parts for two movements of Orff’s iconic masterpiece. The recordings and videos have been mixed together until the unmistakable grandeur of ‘O Fortuna’ and hopeful energy of ‘Ecce Gratum’ are recreated in all their richness. The two films premiere on Edinburgh International Festival’s YouTube channel on 8 August.

Highlights from the Festival’s archives will be celebrated by a series of five Usher Hall concerts including Orchestra dell’Accademia Nazionale di Santa Cecilia, BBC Scottish Symphony Orchestra’s Verdi Requiem and Cleveland Orchestra with Franz Welser-Möst and Joela Jones. These will sit alongside the 15 concerts from The Queen’s Hall between 10–28 August on BBC Radio 3 as part of BBC Arts Culture in Quarantine. The Queen’s Hall Series includes pianist Elisabeth Leonskaja, mezzo soprano Sarah Connolly, Trio Zimmermann and Les Vents Français.

Additionally, Edinburgh International Festival is holding Artists in the Age of Covid – a range of digital conversations for the global performing arts industry, hosted virtually between 8–15 August. This series, in partnership with The Edinburgh International Culture Summit, will seek to explore the challenges and opportunities for the performing arts in a post-COVID world. International creatives discuss subjects ranging from the power dynamics exposed by coronavirus, to the relationship between organisations and communities, to artists reimagining the future and collaborations between different artforms to create work suitable for present conditions. Participating speakers include Chief Executive of Eden Court James Mackenzie-Blackman, curator of Glasgow’s After the Pandemic Summer School Graham Hogg, Artistic Director of Melbourne Arts House Emily Sexton, poet and novelist Jenni Fagan and Chief Conductor of Antwerp Symphony Orchestra Elim Chan.

“For most of us, the past few months have been a time spent at home. For some, a time spent with family and for many a time overcoming adversity. For artists, home can mean different things; there are the buildings where they live and the relatives and friends they love. But beyond these, there is another home and another family at the centre of their creative lives. This home is the concert platform, the proscenium arch and the rehearsal room. This family is their fellow actors, musicians or dancers as well as directors, choreographers, conductors, designers, technicians and stage managers. COVID-19 has not dimmed the creativity of our artists, but it has physically isolated them from each other.

“For the first time since lockdown, orchestras, ballet companies, traditional musicians, theatre ensembles and designers have come together to perform in and light up the venues they love. This has been achieved with great care to ensure the safety of all involved. It represents a cautious but essential step towards the re-emergence of the performing arts in our country.

“The programme of events that we announce today is not so much a curated season as a reunion – it is time for our artists to make theatre together, to play music together, to sing together, to dance together and to light up the skies together.

“We are working hard to engage and employ artists and freelance workers in the festival ecosystem and to help companies take the first steps in performing together in venues. Through these projects, we are providing employment for over 500 Scottish artists, creatives and technical staff.

“To all who have participated and all those who have supported them, thank you.”
Top image - Photo by Ryan Buchanan. Middle - EIF
Email ThisBlogThis!Share to TwitterShare to Facebook