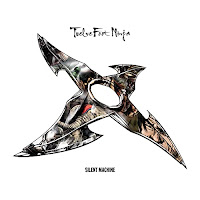 In an effort to further her musical education, Susan Omand has been set "homework" of listening to albums released after the 1980s that she has missed out on. This week she encounters a Silent Machine with a latin beat...
Find the full list of albums for Educating Omand: Year 3 here
“Another Educating Omand album another raucous metal… bossa nova track?!”
That was my exact thought as I listened to track 1, Coming for You, on Silent Machine by Australian metallers Twelve Foot Ninja. And yes, I’m being serious about the Bossa Nova. This is a superb album that wrong foots you at every turn. The bossa nova in the first track gives way to stunning prog electronica undercutting the second song Kingdom, to the delightfully discordant dub reggae in Mother Sky and Vanguard. The further through the album I got, the more excited I was about discovering what might be coming next – the big band swing/brown noise mix of Shuriken, the easy listening 70s keys/industrial guitar mix of Deluge, the almost orchestral feel of Liberation, the pure pop/Spanish guitar of the title track. Round out the album with a very Twin Peaks-ish Rogue, the glorious honkytonk piano on Ain’t That a Bitch before finally heading back to the latin rhythms/sixties hippiness of Luna. To be honest, probably the most disappointing track on the album for me is Myth of Progress which, although still really good, is played relatively straight (apart from a tiny spark of fairground organ) and could be on any metal album, because I’ve come to expect so much more from these ultra-surprising musical ninjas.
But, for me, the appeal of the album is more than just about the smorgasbord of genres. There’s an absolute artistry to how the mix is put together as each song, each work of art, makes perfect sense once you get over the initial shock of it. This is not a typical debut album, where a band is trying out different styles or trying to find their own voice. This is deliberately and bombastically eclectic. It’s not a mess, even though it is chaotic and there are so many layers to discover as well as the rich overall noise. I’ve listened to this album several times now and there’s always something new that catches my ear. Because it is an incredibly listenable album. Even dissecting each song into its component parts, the instrumental execution and orchestration is brilliant and vocalist Nik Barker is beautifully versatile in his tone, equally as able to carry a delicate tuneful ballad as a growly rock song.
But their creativity, apparently, extends even beyond their music prowess. On doing a bit of research after my first listen I discovered that, on first release, each song on the album came with its own comic illustrating a concept story of said twelve foot ninja, out to rebalance the world and save it from its self-inflicted apocalypse. I would have loved to see the graphical incarnation of the album because I imagine it would be just as complex and intriguing as the music itself.
So yes, Mr Ames, you can count me as educated this time, I love this. So much so that I am going to investigate a lot further into their portfolio as they have really captured my imagination. Oh, and their videos are hilarious!
Image - Amazon
Email ThisBlogThis!Share to TwitterShare to Facebook