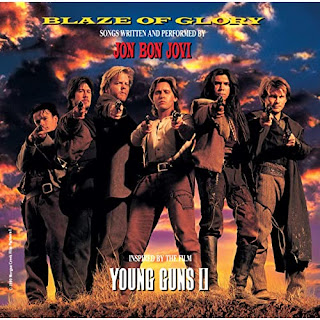 So many well-known albums turn 30 this year and Steve Taylor-Bryant and Susan Omand travel back to 1990 to revisit some of the sounds of their youth that made parents shout "Turn that noise down!" This week, Steve is going DOOOOOWWWWN in a Blaze of Glory...

Before I continue, I need to say that, throughout this rambling opinion, I will be referring to Blaze of Glory as a Bon Jovi record. There are many reasons for this, laziness on my part is definitely up there, but when you listen to Blaze of Glory it’s not a solo record sounding release, it is not in any way different in style to anything released by Bon Jovi the band, and was actually born because Emilio Estevez wanted to use a Bon Jovi song in his film Young Guns II. But it is not a solo record, I do not care how much people point out it says ‘Jon’ Bon Jovi on the cover, but it is very good and holds up even after all this time.

Written and recorded fairly quickly, Blaze of Glory is certainly a treat for the ears, it is a fun record and rock bands do not make fun records anymore. When you are a famous singer songwriter and like cowboys and have famous friends like Jeff Beck and Elton John, I think you SHOULD make a record like this, it’s a joyous experience for the listener and must have been pretty good for those involved in the recording. Interspersed throughout this "soundtrack" are quotes from the film, which bring back happy memories of watching the Young Guns films, and the odd orchestration from the wonderful score by Alan Silvestri, but it is mainly a rock record about cowboys and the issues of redemption that ran through the story of Billy the Kid (I joked at "soundtrack," as only two of the songs are actually used in the film, both over the end credits) and I am totally fine with that. Jon Bon Jovi has a good voice, a nice turn of phrase in his writing, and an ear for a catchy tune which is why his band his still successful after nearly forty years, and Blaze of Glory has some highlights for sure.

Miracle is a pretty good slow paced early 90’s rock tune, Never Say Die a faster paced more early 80’s rock tune, and the titular Blaze of Glory are all solid, very Bon Jovi sounding tracks that are still enjoyable today. Bang a Drum is a great song I still cannot stop myself singing along to, and Santa Fe and the rest are all pretty good. The biggest highlight on the record though shows what a sucker I am for cheesy rock ballads because Dyin’ Ain't Much of a Livin’ is still a song I listen to for fun, it’s also the only song that, if it was sung by somebody else, doesn’t sound like a Bon Jovi record. It has chord changes and orchestral parts that sound different to anything else produced by Jon and his pals, it has an out of place piano arrangement that just works and doesn’t have any of the Young Guns cast in the video. It's still my favourite though, and to quote William H. Bonney “You asked me if I have scars? Yessir, I have my scars.”