Turn That Noise Down - Jeff Lynne 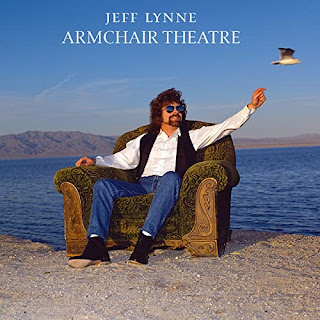 So many well-known albums turn 30 this year and Steve Taylor-Bryant and Susan Omand travel back to 1990 to revisit some of the sounds of their youth that made parents shout "Turn that noise down!" This week, Susan takes her seat in Armchair Theatre...

Jeff Lynne’s music has been a part of my life’s soundtrack for many years. From my father’s ELO collection back in the day to mother’s love for the Travelling Wilburys his songs have always been a happy place for me. Luckily for me, his solo work has the same effect on me.

Armchair Theatre was the first of his solo albums and calls upon the talents, not just of Mr Lynne himself, but ELO band mate Richard Tandy and fellow Wilbury George Harrison, and George’s pal Ringo chips in on drums on one of the tracks too. Lynne also got superstar composer Michael Kamen in for the string orchestrations, infamous brass session musician Jim Horn in for the saxophone parts and the rock and roll legend that is Del Shannon did some of the backing vocals. An impressive line-up indeed.

But, for me, it’s all about the music and it’s exactly what you’d want from a Jeff Lynne album – some may say “safe and predictable”, and I believe this is a very under-rated album because of that because I’d argue that sometimes staying within a comfort zone and doing what you do best is a very good thing. And he does it very well indeed. From the ELO-ish Every Little Thing at the start to the Simon and Garfunkel-esque Save Me Now at the end I’m smiling at every track. There’s proper jive rock and roll in Don’t Let Go, laid-back easy listening with fab harmonies in Lift Me Up and a very Wilburys feel to Nobody Home. There are also cool covers, with much twangy guitar, of classic tracks in September Song and Stormy Weather. There’s even a 60’s Elvis vibe to Don’t Say Goodbye, a 70’s Eagles sound to What Would it Take and then it’s lighters in the air for the ballad Blown Away. Safe, yes, comfortable, definitely.

The one slightly different track on the album is Now You’re Gone, a song he wrote after the death of his mother and, even though it’s an upbeat sounding song, the subtle minor key and instruments that would be more at home in the souks of North Africa add a heartbreaking melancholy. I love it.