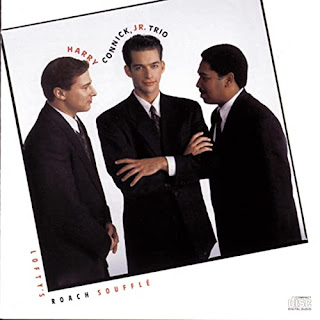 So many well-known albums turn 30 this year and Steve Taylor-Bryant and Susan Omand travel back to 1990 to revisit some of the sounds of their youth that made parents shout "Turn that noise down!" This week, Susan indulges her tastebuds with Lofty's Roach Souffle...

You may remember that, two years ago, when I talked about a Harry Connick Jr album for Turn That Noise Down [here – Ed] I mentioned how wonderful his jazz piano playing was. Well in Lofty’s Roach Souffle (how great an album title is that btw) that’s all you get – it’s an instrumental piano jazz album and it is stupendous.

Well, I say that’s all but it’s really the Harry Connick Jr Trio as Benjamin Wolfe and Shannon Powell join him on double bass and drums respectively. It was released at the same time as his vocal album We Are In Love but, to be honest, even though I love the familiarity of the big band classics written by Cole Porter, Manning Sherwin et al that appear on that album, it’s Lofty’s that I keep going back to again and again. All the tracks on here are written, or co-written, by Connick and you can tell this is an album that has grown organically out of jam sessions with his mates in the band and improvised keyboard noodling [tech term – Ed]. I’m absolutely sure that, like all good jazz, it would never sound the same twice if you listened to the band play it live.

Unlike a lot of “modern” jazz though, this has a lot of blues in it and the noodling does all encompass a central melody; there’s none of the jarring dissonance that can put a lot of people off jazz as you can always find and follow the thread in each song. It also very successfully passes that thread around between the three players, with each highly accomplished musician getting a chance to shine. That’s the thing for me, with jazz - for all the complexity and improvisation, all the “I meant it to sound like that, honest” of it, there is no place to hide. Everyone in the band has to be absolutely at the top of their game in order for it to work successfully and not just sound like a mess. And these guys have it in spades.

From the wandering scales and arpeggios and subtle brushed snares of One Last Pitch to the boogie woogie basslines of Bayou Maharaja just over an hour later, this is an album that you put on when you just want to sit quietly, drink gin* and wind down while pretending you’re in a smokily anonymous late night jazz piano bar.

Oh, and the album title? Apparently inspired by a survivalist trainer at the SAS bootcamp that Connick went to when he was working on the WW2 film Memphis Belle, who could allegedly make food out of anything.