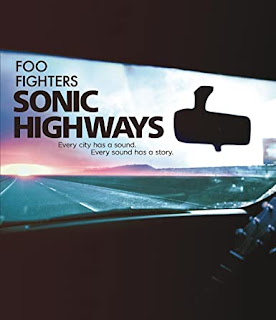 Nothing to do with blue hedgehogs, Steve Taylor-Bryant hit the road and watched the documentary series Sonic Highways...

I like the Foo Fighters just fine, I am not a huge fan though, I don’t buy the merchandise or spend hours in physical or virtual queues for concert tickets, I only began listening to them because I liked Dave Grohl. I was a huge Nirvana fan, devastated when Kurt died, and as a drummer myself I sort of gravitated towards Grohl and kept an eye out for news just hoping he was okay, he seemed in the press to be a really nice guy and I liked that about him. Over the years and listening to all the albums I have had a lot of pleasure. Grohl’s technical abilities as a musician were never in question and, as he built the band around him, the sound became fuller and I had a great time listening to tracks or watching the odd video (and some of those videos were very odd). What never came across to me through the music was Dave’s soul, that personal and emotional connection you get with an artist, and whilst everyone I knew got it, I just did not.

The show was made to commemorate the Foo Fighters twentieth anniversary back in 2014, where the band would visit a different city each week and record a song inspired by someone or something local. But Sonic Highways turned into more than that, it morphed into a brilliantly entertaining history lesson of American rock and roll, it was a band and fan personal journey into what has to transpire for a song to be written, and it was an insight into events and places that us riff raff rarely get invited.


Starting in Chicago and finishing in New York, Sonic Highways took the band and crew, along with producer Butch Vig, across the States where we learnt about the origins of blues, of funk, of hip hop, of punk and new wave, where we got to meet artists both globally recognised or not even famous in their hometown, and we visited studios and venues for the Foo Fighters recordings that are like religious buildings to musicians. Most episodes were entertaining and informative, Chicago and Nashville especially, and, whilst the final episode in New York was probably the biggest in terms of scope (it included and interview with President Obama,) it was when Dave Grohl returned to Seattle that I broke emotionally. I was always expecting some sadness when Seattle’s time came. I knew a lot of the conversation would be Kurt based, and memories of recording with Nirvana, but having never seen the show before I was not prepared for Chris Cornell to pop up. Talking about the sadness that enveloped Seattle after Kurt Cobain passed away with a man who himself died far too young and far too recently for my liking was the cork being released from my emotional bottle. After composing myself and watching the episode again I learned a lot about life in Seattle, about the bands I grew up loving, about the cities eccentricities and about how the lifestyles influenced the music, but I also got to spend time with Chris Cornell talking about his life in music at the start of ‘grunge’ and I got to see Dave Grohl sort of have a cathartic moment which led to what Foo Fighters was to become.

Sonic Highways is a must watch for fans, but even as a casual enjoyer of music there is a lot of history and some great performances across eight wonderful hours of television.