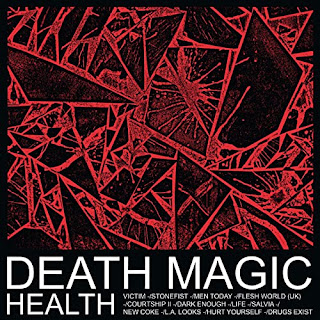 Ruairi B takes his health and his HEALTH very seriously. Here's his retrospective look at The Undervalued Brilliance of HEALTH’s album Death Magic...

Ever since their 2005 inception, Los Angeles noise-rockers HEALTH have always been confrontational in nature. Commonly described as “body-horror in audible form” in their early days, their first two records can be heard as Tsukamoto’s very-own Tetsuo series, adapted and administered into our eardrums rather than our eyes. The band’s cascading sound of contorting, electronic-tinged noise rock during their debut full-length left an absorbing (albeit bruising) impact on many outlets, while garnering an extremely positive reception from noise enthusiasts and critics alike. NME listed it as 68th in their “101 Albums to Hear Before You Die"; a considerable feat considering their youth as a band. This acclaim continued when Nine Inch Nails’ very own Trent Reznor caught wind of them, with HEALTH later supporting NiN during touring in 2008.

Despite their ear-splitting sensibilities, HEALTH always had a knack for pop-influenced melodies, albeit with a rattled, brooding twist; elements that were saved to close their debut with a more melancholy edge. These sounds were expanded-on further with their even more critically-acclaimed sophomore, Get Color, which saw HEALTH reel-back on their dense, wall-of-sound mentality with a more coherent sense of abrasive musicianship and traditional songwriting amidst their piercing pedal effects, tribal drumming and industrial, clamouring feedback. HEALTH received further exposure for their remix albums Disco and Disco2 (featuring remixes by the likes of Pictureplane and Crystal Castles), as well as their soundtrack work for Rockstar Games’ Max Payne 3 in 2011, giving them a further surge in attention outside their noise rock and industrial circles.

Then, in 2015, came Death Magic, released almost six years after their sophomore.

Death Magic was a long way from HEALTH’s sounds of old, and a long way from being Get Color V2. Quite the contrary; Death Magic was, for all intents and purposes, a synthpop album. A synthpop album drenched in industrial foreboding and astringent influences, but synthpop none-the-less. As you can imagine, this split their fanbase in half, with many discarding the band at first whiff of their new sound. From critics, the album’s reception was still positive, but considerably more lukewarm in relation to their previous release, echoing the same criticism that the band had moved too far away from their caustic roots. Despite considerable publicity, along with some glowing reviews from certain critics amidst the ones that were less enthusiastic, this was a considerably nuanced reception which the album couldn’t shake.

So, why write this article? Well, at least from what I’ve seen, I personally believe Death Magic was unfairly treated, and somewhat pushed under the rug. Not only is it an ambitious and daring effort on the part of the band, but one with a much more in-depth satirical critique. Through their newfound sound and the album’s general themes, the band tackles the hollow nature of the more pleasure-seeking facets of modern, urban societies through irony, aggression, introspection and melancholy across the album’s 38-minute run-time.

From their brooding opener, the Brad Fiedel-inspired Victim, to the album’s variation between industrial-electro, synthpop and the ear-shredding, noise-laced tracks that act as bridges between the two, the album paints a picture of a dope-addled, self-obsessed, technological society that’s falling apart in its own hedonistic nihilism. Death Magic sees HEALTH’s abrasive attributes used in a more nuanced way, instead acting as the demented, darker underlay to their saccharine component, painting these tracks with a modulated sense of dread. The underrated brilliance of their nectarine cuts, such as Flesh World (UK), Life and LA Looks, intentionally vary between sugary melodies and distorted electronics that toy the border between silvery synth-lines and piercing, industrial shrieks. It’s bleak, mocking, anti-utopian EBM for the tech-absorbed generation; its cloying nature is fully intentional, but remains feeling as if they’re on the border of breaking into chaotic, cacophonous angst at any moment. 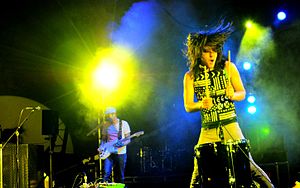 This led me to a realisation. HEALTH’s new pop-oriented tracks aren’t sweet and compromising; they’re deeply uncomfortable, just like their material of old. They’re the auditory incarnation of a mechanical, emotionless sex doll; using a plasticised, attractive face to hide something much colder, unfeeling and unnatural, just like the lifestyle they’re castigating. You could see it as a mirror-reflection of their Los Angeles roots. One might also call their brand of pop a mordant, sarcastic ridicule of their mainstream counterparts, as if scorning them for trying to fallaciously upkeep the mood in a society plagued with casual, evanescent desires and substance worship. Pessimistic, perhaps even defeatist? Absolutely. Cathartic for those who believe in their message? Most definitely.

This theme goes further with the use of Jake Duzsik’s vocals, which rarely sound as if they come from him alone. His disembodied, androgynous vocal style reflects something much wider and more detached, as if his lyrics are being spoken by a collective of people, or a mentally-connected hivemind. Duzsik’s constant lyrical insistence that “love’s not in our hearts”, “we die, so what?”, “life is good”, “it’s not love, but I still want you” and “I don’t know what I want, but I know that I don’t know what I want” seems to enforce the constant delusion that a life based on sybaritism is fully worth living, conveyed through this mass-scale, lifeless delivery. This lifelessness acts as the overarching theme for much of Death Magic, instead playing on the trait to convey much more meaning beneath the arid surface for those who want to look.

But what’s often glossed-over is that Death Magic still features HEALTH at their noisiest. Men Today, Courtship II and Salvia serve as the more brooding and intimidating songs of the bunch, with flurrying drums and bombastic, looming electronic taking the forefront once again. Its these moments of shattering noise that draw us further into its nocturnal despondence, as if they were transient moments of sobriety and self-reflection in a world of fleeting, narcotic-laced dissoluteness.

Tracks like Stonefist and New Coke make the line between these two kinds of tracks a bit more blurry, bringing both ingredients together in equal swing, providing a much more hard-hitting shot of electro-industrial. The latter is even complete with an anxiety-inducing industrial crescendo in its midpoint. The album’s closers offer a more atmospheric, melancholy finish (a mentality the band has maintained since their first effort), despite featuring their most aggressive song titles “Hurt Yourself” and “Drugs Exist”.

I stated in this article’s opening sentence that HEALTH have always been confrontational, and despite sonic difference, the band maintained this sensibility through their aforementioned song titles, as well as their accosting music videos (going so far as to feature grisly plastic-surgery footage and projectile vomiting). Needless to say, HEALTH’s new image garnered controversy. Criticism was directed at their use of these tactics, with some outlets condemning them as “attention-seeking” and “childish”. While these criticisms are certainly valid, I see HEALTH’s bellicose nature to be a further reflection of the fame-hungry lineaments of the world they’re satirising, tackling them head-on in the ugliest way possible. Since their music previously embodied noisy, jarring distinctions, you could say that they decided to experiment with bold, adverse visuals instead; I don’t see anything wrong with this as it succinctly matches up with the album’s themes. It’s theatrical to a point.

HEALTH’s candid chastising and musing on the overbearing, idolised shallowness of modern hedonism creates an album that weaponizes its pop-influences into a sound laden with existential and technological dread, pointing the finger in forthright irony at a society that’s collapsing mentally and physically through instant-gratification, drugs and decadence. Whether or not that’s something that you believe about the world today, its indubitable that the record sonically paints such an excess-obsessed dystopia with ease. If HEALTH’s first two records were representative of Shinya Tsukamoto, then Death Magic is the firm and controversial embodiment of Gaspar Noe, mixed in with a heavy dose of Cronenberg and Verhoeven.

Yet, amidst this whirlpool of negativity, Duzsik closes the album by appealing to both those who indulge in this behaviour alongside those who don’t, stating: “live as you'd like; it's hard to know what's right. Pray if you want, but try to love the ones who don't.”

It breaks my heart that Death Magic was, in my opinion, overlooked, quickly falling off-the-radar due to HEALTH’s considerable mainstream obscurity. This wasn’t helped by the album’s destiny to be shunned by their noise rock fans of old. One might say it was released by the wrong band to the wrong demographic, or that the band fully knew who they were trying to appeal to, but made it difficult for said group to find. Despite all this, I think Death Magic is something of an underappreciated tour-de-force; the way the record captures the nihilistic elements of modern indulgences stuck a chord with me, and I strongly believe it will with many others who have yet to hear it.