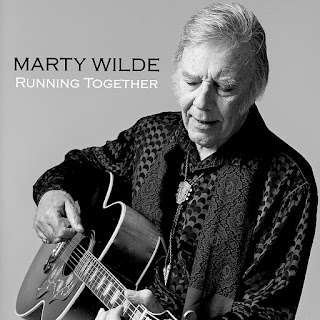 Eternal rocker Marty Wilde has a new single coming out at the end of July. Watch the video for Running Together (and see if you spot anyone else you might know)...

Marty Wilde MBE, the 50s teen heart-throb who notched-up four Top 5 UK hits by the age of 20, and still remains an iconic stalwart throughout the industry, has unveiled the stunning new title-track from his forthcoming album, Running Together, with the single being released on 31 July (album out October); The song and video feature Marty’s two daughters, Roxanne Rizzo Wilde and [Spoiler! - Ed] the Brit award winning Kim Wilde, plus son Ricky who completed the picture with a wonderful arrangement of the last track on the album called Eddie which is a special tribute to Eddie Cochran. A complete family affair, Running Together inspired the family to create their very own rock-down in lockdown video – perfectly social distanced, yet rockin’ together, alongside the Wildcats. The single hotfoots Marty’s forthcoming new album of original material, Running Together, and sets the tone for a 50-date UK live tour (delayed due to lockdown, but kicking-live later this year.

Showcasing Marty’s distinctive vocals, Running Together is a compelling, catchy, radio-friendly track, sprinkled with the magical melodic essence of the 60s. A sound from now, that somehow sounds so familiar, that you can’t help sticking it onto ‘repeat play’. Planned for release this Spring, alongside the start of Marty’s 2020 UK tour, Running Together was forced into shielding by the virus lockdown; and suddenly the Wilde family creative-genius kicked into action. Marty, Roxanne, Kim and the Wildcats, all performed to iphones in their separate gardens, coming together in one spectacular video; a testament to the ingenuity and diversity of the Wilde clan.

Running Together’precedes Marty’s forthcoming epic new album of a vinyl-busting 15 tracks, all original pennings, written or co-written by Marty, performed by himself and the family.

A melodic hand-picked journey of tracks, which weave their way through the instrumental tapestry of Marty’s life, Running Together is a historical story-book of pop throughout the ages. It’s a collection which Marty has always wanted to record - a lifetime in the making, with songs that stand the test of time.

The title track from the album Running Together is released as a single on 31 July. The album, is released on 2 October 2020 - both on Pushka Records/Right Track Universal