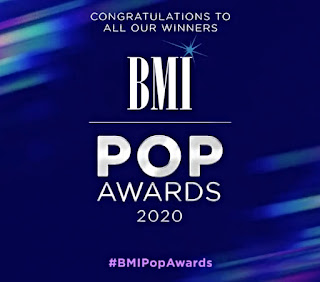 The top songwriters, publishers and administrators of the previous year's most-performed pop songs in the United States were celebrated across all BMI digital and social channels. Major award winners for Song of the Year, Songwriter of the Year and Publisher of the Year were also announced.

"We're so proud to recognize BMI's incomparable family of pop songwriters and music publishers whose talent, originality and creativity helped inspire many of the most popular songs of the past year," said Barbara Cane, Vice President, Worldwide Creative. "With unique artistry and fearless authenticity, their music has the ability to inspire, uplift and empower us to drive the positive change that is so needed right now. We thank our community of music creators for sharing their gift of songwriting, and we look forward to celebrating with everyone in person at next year's ceremony."

Honours for Songwriter of the Year were shared by global superstars Khalid and Post Malone, who each penned four of BMI's top-performing songs of 2019. Khalid's Beautiful People, Better, Eastside and Talk dominated the airways and the charts, alongside Post Malone's Goodbyes, Jackie Chan, Sunflower and Wow.

The two songwriting heavyweights enjoyed a successful year, accruing numerous accolades and media praise between them. The catchy hit single Talk earned over 186 million streams on Spotify, making Khalid the most listened to artist on the platform, and garnered a GRAMMY nomination for Record of the Year, his sixth nod to date.

Post Malone teamed up with fellow BMI songwriter Swae Lee for Sunflower, which peaked at number one on the Billboard Hot 100 and charted in the top ten for a total of 33 weeks. The smash single received two GRAMMY nominations for Record of the Year and Best Pop Duo/Group Performance. Post Malone was also named BMI's R&B/Hip-Hop Songwriter of the Year in 2019.

The poignant break-up anthem Without Me, co-written by pop powerhouse Halsey and singer/songwriter Delacey, was awarded Song of the Year, nabbing Halsey her sixth BMI Pop Award and the first for Delacey.

A reflection on lost love and one-sided relationships, the single marked the first time Halsey ditched her moniker and wrote under her given name, Ashley Frangipane. The intimate lyrics and departure from her character resonated with fans, driving the mega-hit to number one on the Billboard Hot 100 chart, becoming Halsey's first number-one single as a lead artist.


Sony/ATV Music Publishing received the coveted Publisher of the Year designation for the eighth time. The publishing giant represented 25 of the previous year's top 50 songs, including Dancing with a Stranger, High Hopes, Old Town Road (Remix), Señorita, Truth Hurts and You Need To Calm Down, among others. Jon Platt, Chairman and CEO of Sony/ATV Music Publishing accepted the award:

For a complete list of 2020 BMI Pop Awards winners and to learn more about your favourite songwriters, please visit https://www.bmi.com/pop2020