Interview - The Kemps: All True 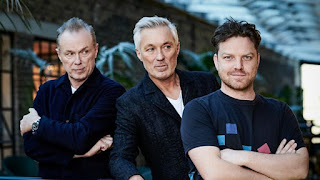 Ahead of the "documentary" The Kemps: All True being on BBC2 on Sunday (5th July), read a real interview with the Kemp brothers, Gary and Martin...

As well as looking back at their musical history, the documentary reveals Gary and Martin’s other passions: Martin attempts to launch a new film franchise - The Hardest British Bastards of the Galaxy - and Gary has his own Vegan meat-substitute, Wonge. 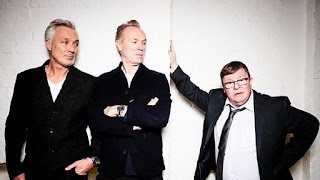 This project feels very different for you guys, how did it come about?

MK - It was one of those projects that came to me and Gary as a draft script from the BBC. I had worked with Rhys Thomas a few years back, so knew how great his work is and his style of comedy, and he opened the script up to me and Gary and said let’s make this something special. Gary and I and Rhys all threw ideas at each other for about nine months before we had a draft we were happy with!

GK - About a year ago Rhys asked if the three of us could meet up. He’d already worked with Martin on the Brian Pern series, which we both loved. We immediately trusted his instincts for the idea and came up with a few more ideas for the show there and then. It seemed to suit that strange place Martin and I occupy, of being actors as well as musicians with a public family story and a band story that goes from the sublime to the ridiculous, to the sometimes out-and-out self-destructive. We also loved the idea of sticking a pin in the ego of our own celebrity.


What can you tell us to expect from the show?

GK - It’s funny! We corpsed a lot on set which was great fun but held up the shoot a bit. It’s basically a mockumentary about our lives and relationship, presented by Rhys’s own character, Rhys Thomas OBE. A spoof of the imagine... type series, with all its usual obsequiousness, but a much cheaper version with poor research!

I’ve seen it a few times now and still discovering stuff that Rhys has subtly put in. Rhys had researched us both brilliantly for the script and we loved taking our different character traits and our perennial tales and puffing them up into caricatures and exaggerations. At least I hope they’re exaggerations! There’s a lot of blur between what is fact and what is fiction. At times on set even I forgot which was real and which wasn’t.

MK - The show is made to make you belly laugh, not a sly grin or a puff of the cheeks but proper laughter which is perfect at the moment!


There’s also an amazing wider cast – did you know anyone before working with them? How easy was it to get them involved?

GK - Yes, we have the great Daniel Mays. I’ve seen a lot of his stage work and love him. I met him backstage when I did Pinter’s The Homecoming. Chris Eccleston has worked with Rhys a few times and likes being in Rhys’s work, so it was a thrill to have him on board, as it was Alan Ford.

Having Anna Maxwell Martin as my wife was so lovely, as she has great natural comedy in her work. Perry Benson, who plays our other brother, we both knew from our days at Anna Scher Children’s Theatre when we were kids. And Simon Day is a comedy legend! The scene with him and Lucy Montgomery was so much fun to shoot. Plus, the wonderful Tony Way, we were very lucky to have such a stellar cast of brilliant actors.

MK - Perry Benson, who plays our brother Ross Kemp (not that one), I have known since we were kids at The Anna Scher Theatre, but the cast was pulled together by Rhys who were huge fans of his work.


Did you know Rhys work beforehand?

GK - Yes! I loved the Fast Show and Nathan Barley and thought his writing and directing on Brian Pern was so accurately observed.

MK - I worked on the brilliant Brian Pern! 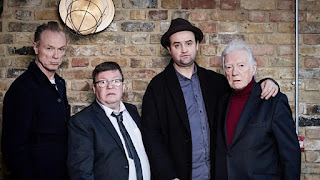 How much was scripted and how much went off-piste?

MK - A bit of both. In each scene we would improvise the beginning and end to see if we could find a comedy moment, but always nail what was on the page.

GK - Most of it was scripted, but we’d usually do some improvisation around each scene. Some scenes we didn’t know what was going to exactly happen and we just let them play out with Rhys’s guidance, but by then we knew what kind of characters our real-life selves had become, if you see what I mean, which made it easier.


How’s it working together again?

MK - Brilliant and this was so nice! Watching G take the mickey out of himself was so nice, he made me laugh so much!

GK - It’s a total joy to work with Martin again - mining our own histories for comedy and pathos as well as building on the fiction that Rhys had given each of us. We both went into this head first with a lot of trust. It felt totally mad at times, but we knew we had to commit to the idea 100 percent or it wouldn’t work. Improvising with him came very easy, especially in the ‘interview’ sections, as we had so much of our own stuff to draw from!


Which of you is more like the version of yourself we'll see in the show?

GK - Growing up in working-class London in the 60s and 70s, being child actors and then being in an 80s band comes with a lot of funny, easily parodied experiences and references but also allows us to over-do the nostalgic memories that you hear all the time in interviews. No one ever tells the truth in celebrity interviews anyway! They are usually awash with pomp and fake sincerity and self-importance and I enjoyed pushing my character that way! Scarily it seemed rather natural!

MK - I think what you see on screen are heightened versions of both of us… or at least I hope so!!!


What else do you both have coming up?

MK - Just working on a new Sunday Morning Show called Sunday Best with my boy Roman.... at least I don’t have to go visiting on a Sunday!

GK - I was meant to be on tour with Nick Mason’s Saucerful Of Secrets this year but it’s been cancelled till October. We’ve got a live album and film coming out later in the year too. Like everyone else we’re isolating and I’m finishing up my own solo album as much as I can in these sadly separated times.

The one-off documentary will air at 10pm on BBC Two on Sunday 5th July
Email ThisBlogThis!Share to TwitterShare to Facebook