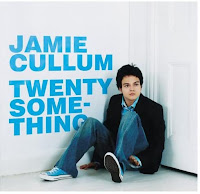 In an effort to further her musical education, Susan Omand has been set "homework" of listening to albums released after the 1980s that she has missed out on. This week she remembers Twentysomething (the album, not the age)...

No, Mr Ames, you haven’t educated me this time...

Because I have Twentysomething already, along with a LOT of other Jamie Cullum’s albums, and I totally love it and play it regularly; I start singing from the first few bars of What a Difference a Day Made and keep going [loudly – Ed] until the final notes of Next Year Baby.

So this isn’t going to be a long article of musical discovery because I already know this album inside out and upside down [sometimes literally – Ed]. For those that don’t know though, Twentysomething is the second and, probably, the best known of Jamie Cullum’s albums. Released in 2003, when he was, yes, twentysomething (24 to be exact), the album marked his breakthrough into the big time, rocketing up the charts, going platinum and making him the UK’s biggest selling jazz musician of all time by the end of that year. Cullum himself is still a hard-working, and touring, jazz singer/ songwriter and radio presenter (seriously, catch up with his weekly jazz night on Radio Two on a Tuesday if you’re a fan of the genre) and he really knows his stuff.

There are songs that everyone knows on here – “proper” Broadway classics like I Get a Kick Out of You and I Could Have Danced All Night and Singin’ in the Rain among many others, all with that signature Cullum jazz twist that makes them sound a lot cooler and (hopefully) more acceptable to those who “don’t like musicals” [you know who you are – Ed] – listen to I Could Have Danced All Night to hear JUST how different it is to the Lerner and Lowe original. There are also surprising covers of more modern songs like Jeff Buckley’s gorgeous Lover You Should Have Come Over and an utterly sublime and completely different version of Hendrix’s The Wind Cries Mary. And from me, an dyed-in-the-denim Hendrix fanatic, this is high praise indeed; the stripped back keyboards (both piano and organ) are a brilliant way to go, the brass hit in the middle eight is perfect and that snare is inspired.

But the real plus on the album, for me, are the five original songs that he or his brother Ben wrote. These songs are maybe more commercially accessible than some of his more experimental jazz arrangements on the album but that is no bad thing. They remind me very much of the 80’s/90’s songs of the likes of Del Amitri, with Cullum’s piano/brass lift to the usual guitar adding a new aspect. And the bossa nova twist to Next Year Baby is a brilliant way to close out the album.

The coolly acceptable face of jazz indeed and a great gateway into an even greater music genre.