Turn That Noise Down - Poison 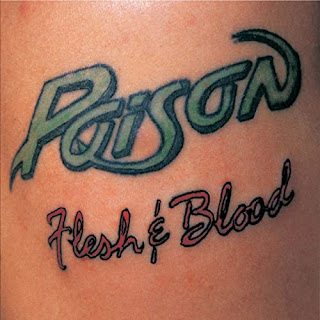 So many well-known albums turn 30 this year and Steve Taylor-Bryant and Susan Omand travel back to 1990 to revisit some of the sounds of their youth that made parents shout "Turn that noise down!" This week, Steve remembers the Flesh & Blood of Poison...

1990 saw a Poison in transition. After two global successes with their particular brand of hairspray rock, Look What the Cat Dragged In and Open Up and Say Aah, some of the members seemed to want to go in a more bluesy direction. Whilst the line up at this point remained unchanged, the music tried to make a more serious point in places and you could grab a taste of what was to come in 1993’s massively underrated Native Tongue, but with half of Flesh & Blood born in the latter half of the 80’s and half the embryo of what’s to come later in the 90’s it plays a little disjointed. That’s not to say that it’s a bad album, there’s much I enjoy in retrospect, some stuff has grown on me in the last three decades, but there are flaws that are all of the band's making for sure.

Let’s start with my pet hate, filler/intro/skit bits. They have no place on a commercial rock record, Poison don’t make high concept musicals or rap records so Strange Days of Uncle Jack and Swampjuice (Soul-O) etc are a waste of time where another fully fledged song could have been. Valley of Lost Souls is a solid start to the record, (Flesh & Blood) Sacrifice gives you your first taste of Bret Michaels at his pervy sounding best and, whilst I love Unskinny Bop, it belongs on one of the previous albums not a release that is supposed to show musical growth. I’ve not got a lot of time for Let it Play but Life Goes On is a solid ballad.

Come Hell or High Water is the first real hybrid song on the record, it’s got recognisable CC DeVille 80’s screeching solo moments but is a lot darker in tone than the usual Poison release which makes it a strange one that I love now but didn’t then. I adore Ride the Wind, I love the cheesiness in the lyrics but how seriously the band takes themselves and it’s one of the best tracks on the album. Don’t Give Up an Inch is another that probably came out of a previous albums recording session and then we get to Something to Believe In which is a truly stunning recording. Beautiful piano, a message of what life was like then (nothing's changed), Michaels at his most sincere, very bluesy almost gospel in places and a reined in DeVille. It’s a lovely, lovely listen. Unfortunately it’s followed up by Ball and Chain with troubling lyrics all over it that has no place then and had no place then either.

Life Loves a Tragedy is another wonderful and powerful ballad that’s beautiful in its construction and then one of my album highlights in Poor Boy Blues which reminds me of every single jam night I’ve ever played at. So Flesh & Blood is still very listenable, problematic, and doesn’t quite grow up. Definitely a Poison record.