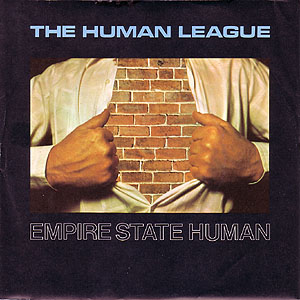 Inspired by our series of articles looking back at music released 30 years ago, Jimmy Hunter takes a step further back in time to give us a Song of the Day 1980. This week, he is in an Empire State of mind (but not that one)...

Electronica. And dance. They started out as one group then (creative) differences led them in different directions. Due to the shared birth, they both had solid fan bases but one of them went on to have much bigger success. But who were the splitters?

Well, fortunately for this week’s review, it doesn’t matter because we’re stretching ourselves to Empire State Human by the Human League. It’s one of the many pre-split tracks that wasn’t, erm, given some attention when the next iteration of the group became successful.

But that’s next year. This is a great record and Phil Oakey and the Heaven 17 boys wrote and recorded some fantastic tracks before the split and this, for me, sits at the top of the pile.

Starting off with the then virtually unknown drum machine, the intro, retrospectively, instantly conjures up future records (Body Rock, Maria Vidal) and several others. Sometimes it’s hard to remember that contained in these vinyl grooves is music that we’d never heard before – certainly not all within one record. A pushing of the boundaries.

The hook comes with the chorus and the repetitive last word of each line (talltalltall; wallwallwall) and it’s far from without having melody – tune, if you like. It does, though, stick to a tried and tested formula: building to a crescendo towards the end with additional backing vocals and instrumentalisation thrown; but it’s never too much.

Do the lyrics matter in this oscillating sea of electronica? Well yes because certainly this pop view of power, building power and using buildings as an analogy was continued into Heaven 17’s writing which was more left wing and less sugar coated than what The Human League would go on to do.

But, whatever. It’s a cracking record and I hope you like it. Here’s the official video …