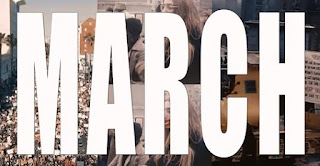 Country stars The Chicks have raised their voices in protest. Listen to their latest song March March...

Wait a minute... The Chicks? Yes indeed, adding their own voices to international protests spotlighting racial inequality, the artists formerly known as Dixie Chicks have made the move and dropped the "Dixie" from their name, because of its correlation with the Mason-Dixon line, slavery and the Southern states of America. So Natalie Maines, Emily Strayer and Martie Maguire are now collectively known as The Chicks and their social media, website and the cover of their upcoming album Gaslighter, their first album in 14 years, have all been altered to reflect this change.

Their latest song March March adds to the fire of protest that has been lit within them, as its lyrics and video reference numerous public civil rights protests involving racial justice, police brutality, gun violence, climate change and LGBTQ rights. The lyrics are strong on many different fronts, from youth gun crime:

To the climate change crisis:

If you didn't hear the music, you'd think the words sound more like they belong in a rap battle than a country song but that's the power of protest. The video also lists the names of dozens of Black victims of racially motivated attacks and police brutality, including George Floyd, Breonna Taylor, Ahmaud Arbery, Eric Garner and Amadou Diallo. That list of names is horrifyingly long and will only get longer...


From The Chicks YouTube channel: (this bears repeating here)

“If your voice held no power, they wouldn’t try to silence you.” - unknown