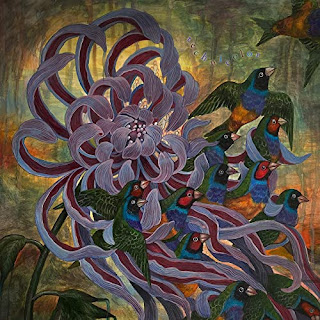 Despite their fairly recent inception, Covet have caused seismic waves of popularity throughout the math rock community. Formed by the classically-trained multi-instrumentalist Yvette Young (following a long history of musicianship, notably in both violin and piano alongside guitar), the band’s frontwoman quickly grew to prominence following her Acoustics EP in 2014. That very same year, Young would go on to form Covet after recruiting a rhythmic section through bassist David Adamiak and drummer Ben Wallace-Allsworth. The softer (but still dizzyingly technical) sounds of Young’s acoustic material was put to one side for a much more progressive and instrumental exploration of math rock sensibilities. Wallace-Ailsworth departed the band soon after formation to be replaced by Keith Grimshaw for the band’s debut EP, Currents, then by drummer Forrest Rice for the band’s debut album, Effloresce.

From a personal perspective, I was absolutely besotted with both of Young’s Acoustics EPs (the second of which was released in 2017), releases which effectively summed up everything I love about twinkling, introspective indie/math rock in the vein of Midwest emo, played with simultaneous vocal-and-guitarwork proficiency, comparable to the likes of Dylan Mattheisen but with a much more meditative and mellow feel. On this topic, I would make the comparison to Young’s Acoustics EP to the similarly-virtuosic Midwest emo pioneer Mike Kinsella, in particular his solo project Owen, in the sense that both Young and Kinsella’s solo material have distinctive dependence on acoustic material over electronic guitars and endless effects-pedals, while maintaining a trademark sound and atmosphere that can be found throughout their respective projects and discography. Of course, Young has been on the playing table for a much shorter time than the middle-aged Kinsella, but I feel the comparison can be attributed none-the-less.

But let’s get back to Covet; specifically, how was their debut full-length, Effloresce? Released in 2018, the record met widespread praise, and managed to pack an exceeding amount of music into its brief 31-minute run-time. It also skyrocketed Yvette Young’s name into significance, with her tapping-heavy technique aiming to marry her piano-based musicianship within the realm of guitar, leading to a much “fuller” sound with several musical layers being in play at the same time. Her playing was seen as adding a unique “feminine-touch” to math rock’s sound; a compliment which shouldn’t be brushed off, as it reflects a style that’s in equal parts gentle and comforting while maintaining its technicality and dense nature.

However, both Adamiak and Forrest Rice’s musicianship shouldn’t be taken lightly, either. Covet’s bass-work perfectly locks in with Young’s riffing with a more distinctive take on the established melodies. Math rock drumming, of course, can be just as much of a rhythmic endurance-test as jazz-fusion, and Rice ties together the band’s unconventional rhythmic-patterns with just as much thought and precision as his counterparts. 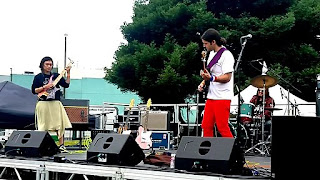 Now we move on to Technicolor, the band’s full-length sophomore effort after a two-year wait. How does it compare to its predecessor, and is it a worthy release for Covet’s growing reputation?

We open with the aptly named Good Morning, which showcases Covet at their softest, with their common tapping-technicality replaced with a hazy, twinkling soundscape filled with guitar-loops and reverb-drenched chords, all punctuated by a growing drum-crescendo in the track’s second half. This introductory track is at stark difference with Effloresce’s Shibuya, which very much got straight into the intricate nature of said album from the get-go. This isn’t to discredit Good Morning; in fact, I believe it to be a suitable start to a record of considerable length compared to its predecessor. It certainly serves its purpose as the start of a musical journey.

The following track, Atreyu, kicks off in traditional math rock style, with uncommon time signatures and winding guitar arpeggios aplenty. Despite this, the tracks packs plenty of melodic variety in its five-and-a-half-minute length, with an atmospheric, mellifluous midpoint that floored me on first listen. Generally speaking, this is Covet at their most technical, taking their ambitious songwriting and rhythmic patterns in full stride.

This pattern of emotive excellence continues with Parachute, an unexpected but more-than-welcome throwback to Young’s solo material, with the notable incorporation of her vocals amidst Covet’s mathy-musicianship and FACGCE tuning. The acoustic sounds are discarded, however, for a reverby, chorus/vibrato guitar (running through a Walrus Audio Julia, I believe) to create a much more “aquatic” feel; think the dream-pop guitar tones of Turnover meets the atmosphere of Total Life Forever-era Foals, all tied together with a pensive, math rock twist. Expect this guitar tone to crop up quite a bit throughout the album; it’s clear Young has grown very fond of this effect after utilising similar sounds in the past on tracks like Glimmer. I wouldn’t personally consider this a criticism as it gives Technicolor a fairly distinctive sound, differentiating itself from Effloresce when the band could’ve easily regurgitated similar material. It makes me excited to see what Covet has in store next, as further use of especial guitar-effects and songwriting in their coming releases could lead to a very engrossing and varied discography. Hopefully, they’ll maintain this mentality.

Needless to say, I think Parachute is an absolutely gorgeous track, bringing back the vocal elements I found myself sorely missing in Covet’s debut, and standing as proof that Young’s acoustic solo-material and Covet’s pushed technicality/experimentation can live in harmony.

These more dreamy, marine tones are carried into the next track, Predawn, carrying a feature with pedal-heavy, ambient guitarist Philip Jamieson. If you’re familiar with this feature, it should come as no surprise that this track boasts a much more ambient, shoegaze-tinged crescendo over their tried-and-tested rhythmic-dissonance.

Nero, however, revisits their swift virtuosity, boasting one of the longer run-times out of the tracklist, but stays very focused on making good use of it. In fact, this might well be the speediest song on the album. While on the topic of “rhythmic-dissonance”, Forrest Rice is in full-swing here, keeping the song’s pace with first-rate precision in some of the hardest drum patterns we’ve seen from Covet as of yet. Guitar lines vary between clean-amp tones and chorus/vibrato effects with ease, with the band’s melodies being at their most frisky and accelerated. This doesn’t mean the track is without its soundscapes; that very same elating mood is present throughout, with guitar-duos and tone-variations leading to atmospheric build ups and an abundance of lively riffs. 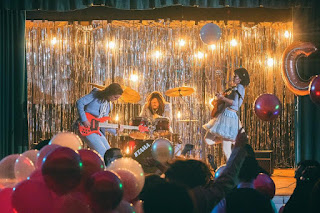 Pirouette acts as a short interlude-piece, dependent entirely on the previously noted chorus/vibrato tone, exploding into a flurry of fusion-tinged drumming as its conclusion. We then go straight into Ares which, coincidentally, was actually a single released in 2017, but has now made its way into the band’s full-length catalogue with a few new production-based bells and whistles. Although the track has previously done its round in the math rock community, it’s good to hear it put within the context of a complete record without sounding forced-in.

Most notable amidst Ares’ math rock goodness is the use of some mean, stand-out bass tones, with Adamiak backing Young’s lead with some formidable riffing of his own, especially in the song’s second half. It’s very easy for math rock bands to neglect bass in favour of lead guitars (a criticism which can be attributed all the way back to the likes of American Football), and it’s good to see Covet are willing to make effective use of it as its own element.

The following song, Parrot continues to make very good use of Adamiak’s bass-work, which may-well be even stronger than before, showing he’s unafraid of moving up the bass’ fretboard to match up with Young’s guitar-lines and provide some stand-out backing. The track also features quite possibly the most lush soundscape on the record in its midpoint, with post-rock flavoured ambience and reverb-galore in painting a more nocturnal auditory landscape. While being one of the shorter cuts (at only four and a half minutes), Parrot packs in the same amount of shared technicality and atmosphere as Atreyu.

With the track Odessa, it would seem Covet saved some of their best ideas for last, bringing in an array of different sounds to give the listener one last musical hit. Being both the longest track on the album, as well as one of the most laid-back, the song continues in Covet’s pattern of musical consistency through standout guitarwork (sounding as if utilising tremolo-picking in parts, along with whammy-bar usage), as well as incorporating Young’s violin musicianship into Covet’s sound for the first time. Needless to say, this fits like a glove within Covet’s overall atmosphere while adding a more folk-tinged element. This tracks stands as proof that Covet are just as capable at writing slower pieces than their more vibrant, technical cuts. The song ends with subtle usage of Young’s vocals in a lullaby-like fashion.

Farewell, the album’s closer, sees Young’s vocals fully return very much in the vein of Parachute, alongside the ever-familiar chorus/vibrato effects. We’re then taken into a distant guitar-solo passage, before exploding into a flurrying crescendo, reeling back again to bring this euphonious record to a close with a few twangy, psychedelic-tinged final notes.

It would usually be at this point in the review that I would address the record’s drawbacks, but I’m confessedly struggling to come up with things to dislike about Technicolor, especially as a complete, front-to-back listen. If I had to pick something to critique, I would say that the tracks Predawn and Pirouette could use more development; in their current state, they generally serve as the fairly run-of-the-mill “interlude” tracks within the context of the album, overshadowed by the rest of the tracklist. Considering Pirouette is the only track with a feature (compared to Effloresce, which managed to fit in two despite its short run-time), I find this choice a little strange. The track Farewell also feels a bit more like Parachute V2 through-and-through with a bit less memorability, whereas I can imagine Odessa as being a much more impactful finale. But these criticisms are largely in relation to which tracks I see myself revisiting more than others, a frame-of-mind which should be taken with a pinch of salt; I’ve already stated I’m much more compelled to revisit the album as a whole rather than in small chunks. With this mentality, these criticisms carry a little less weight, at least for me.

Regardless, for its genre and niche, Technicolor really is outstanding, and I have no hesitation in saying it both lives-up to Covet’s growing acclaim and surpasses Effloresce in ambition, experimentation and general exceeding quality, with full justification in its 47-minute length; it’s a more-than-worthy successor.

Whenever I find Covet in my rotation, I feel compelled to grab the nearest guitar, regardless of pedals, models or my own paltry skill, and play whatever twinkling, finger-picked riff I can possibly come up with using my knowledge, no matter how limited it might be compared to the band in question (I assure you I did this several times while writing up this review). I see this as the kind of music to rouse inspiring musicians with hopes that they will one day be able to compose in this manner: it’s invigorating music, especially for guitarists. The reason why I see this as such high praise is that, in light of the formidable complexity and labyrinthian nature of their music, Covet’s sound never once comes across as braggart or overbearing in that classic, Malmsteen-esque way. In other words, you don’t need to be a virtuoso to get a compelling and exciting listening experience from Technicolor. That, in my eyes, is phenomenal and mature musicianship in itself.