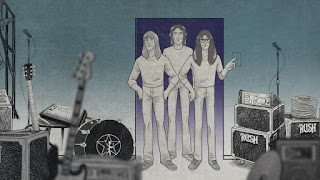 In celebration of the 40th anniversary of Permanent Waves, Rush have released their new official conceptual music video for The Spirit of Radio...


The animated video captures the magic, spirit and growth of the FM radio format with a nostalgic nod to the pioneering DJ's broadcasting music into homes around the world. The video also pays homage to Rush's friend, soul brother and fellow bandmate Neil Peart whose music and lyrics continue to capture the hearts and imaginations of the fans.

The Spirit of Radio is the first single off their 1980 album Permanent Waves, which reached No. 4 on the Billboard 200 in the U.S. and No. 3 in Canada. It is Rush's seventh studio album and signalled a new direction for the Canadian band as it entered a new decade. "The Spirit of Radio" marked the band's successful step from the more lengthy and thematic writing style they were known for and it has become one of their most cherished songs among fans. It entered the Billboard Hot 100 at No. 51 in the U.S., No 22 in Canada, the Top Twenty on the U.K. Singles chart and was named one of The Rock and Roll Hall of Fame's 500 Songs That Shaped Rock and Roll.

This year also marks the 100th anniversary of the first entertainment radio broadcast from the XWA studio in Montreal, as well as the first licensed broadcasting station in the U.S.