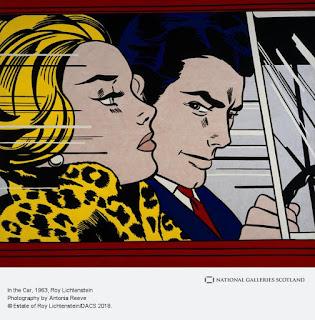 What makes a painting iconic? Who decides what art is worth? Why can’t I touch artworks when in a gallery?

Six in-depth videos will explore these and other common musings on art in Questions about Art, a brand-new, informative and unprecedented insights video series from the National Galleries of Scotland (NGS). All are explored through filmed interviews of expert analysis, archive material and animations, and never-before-seen ‘behind the scenes’ footage from within the National Galleries. The videos aim to investigate, analyse and share comprehensive insights into these questions, rather than provide definitive answers.

One video in the series is What Makes an Artwork Iconic? This explores Ray Lichtenstein’s seminal large-scale painting In The Car (1963). The video focuses on how In The Car has become ingrained within our collective consciousness, the significance of the painting to both its own era and to art history, and how it continues to spread throughout culture even today, influencing advertisements, Snapchat filters, TV shows and the fashion industry. We explore the painting’s shifting perception from the initial controversy when it first entered Scotland’s national collection in the 1980s, to now becoming one of the Collection’s most loved artworks, and one of the most widely-recognised artworks in the world. For the first time, viewers can get a behind-the-scenes look at the Galleries’ Granton storehouse, and close ups of the painting itself.

Another video, Why can’t I touch art?, analyses the complexities around artworks being touched and how current pioneering artists are challenging the idea that art cannot be touched by incorporating the sense into their multi-sensory creations. For the first time, viewers can see the Conservation Team in action with insights into the many intricacies of preserving paintings, drawings, watercolours and other creative forms. These include some surprising details, such as how the lifespan of paper has changed considerably since the fifteenth century, meaning that countless artworks painted or drawn several hundred years ago have a much greater expected lifespan than many of those made not only in the last century, but remarkably, made today.

Other videos explore the value of art, how art records history, why there’s so few female artists and whether or not art is beneficial to your well-being. They feature a range of experts - including specialists from across the Galleries, the Deputy Director of Sotheby’s in Edinburgh and art therapist Lucy Bell.

To inform the series, NGS asked visitors for their most-common art queries in late 2019.

Questionnaires were placed within the galleries, audiences could share questions through the NGS Research panel, and digital visitors could submit their queries through a Pop-up box on the website or use the #AskACurator hashtag on social media. The Galleries also utilised AnswerThePublic.com (which employs Google’s autocorrect function) to identify commonly searched questions relating to key art words. The Security and Visitor Services team also shared the most frequently-asked art queries they receive when working in gallery spaces.

An incredible 260 questions were received in response, which were whittled down to the six queries the public were most keen to know. The questions were then divided by theme and key ones were identified using a scoring system based on frequency (ie ‘how many times has it been asked?’) and whether or not they were asked by Galleries audiences directly (doing so scored higher than those accrued through Google’s autocorrect). Soon after, six videos were produced by the Galleries’ digital team.

Sir John Leighton, Director-General of the National Galleries of Scotland, said: “Questions about Art is important to us not just in how these videos help make art more accessible to everyone, but in how the questions were initially collected. We wish to listen as much as we wish to inform, so we are delighted to share these fantastic insights into the public’s most sought-after queries. We hope the public absorb and engage with these videos and above all, continue to ask us questions about art and Scotland’s magnificent national art collection”.

This new series builds upon the popularity of What is…?, the NGS series of videos exploring of the origins of and ideas behind key art terms, such as Surrealism, Expressionism and Pop Art. Both Questions about Art and What is…? are part of the National Galleries of Scotland’s overarching vision Art for Scotland: Inspiration for the World, which aims to make both art and Scotland’s national collection accessible to everyone. This digital aspect of this vision has been built around the complete overhaul of the National Galleries website, making it easier than ever to view, read and enjoy artworks and art.