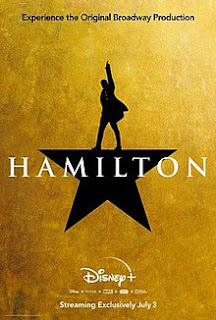 Disney+ has released a short trailer for the upcoming global streaming premiere of Hamilton on July 3rd...

The 11-time-Tony Award®-, GRAMMY Award®-, Olivier Award- and Pulitzer Prize-winning stage musical Hamilton is the story of America then, told by America now. Featuring a score that blends hip-hop, jazz, R&B and Broadway, Hamilton has taken the story of American founding father Alexander Hamilton and created a revolutionary moment in theatre—a musical that has had a profound impact on culture, politics, and education.

Filmed at The Richard Rodgers Theatre on Broadway in June of 2016, and originally due for release NEXT year but moved up (rather than delayed) because of the Covid-19 pandemic, the film transports its audience into the world of the Broadway show in a uniquely intimate way. The film includes "the opening statements from King George AND the bows music. AND the weird thing Thayne does during bows. All of it." according to writer and star Lin-Manuel Miranda's own Twitter account but what it does NOT include, that is normally heard in the stage version, are two of the 3 F-word utterances. He explains more:

...I literally gave two fucks so the kids could see it:
1. In Yorktown, there's a mute over "I get the f___ back up again"
2. "Southern *record scratch*kin' Democratic Republicans."
You can sing whatEVER you like at home (even sync up the album)!
Love you. Enjoy.
— Lin-Manuel Miranda (@Lin_Manuel) June 22, 2020

Experience the original Broadway Production of Hamilton, streaming exclusively (and not just for a limited time) on Disney+ on July 3rd from 8 am (BST).