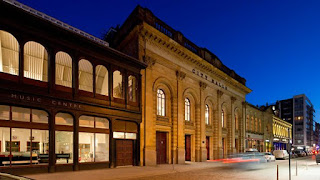 Live classical music will return to Scotland with four recitals at Glasgow’s City Halls, to be broadcast live on BBC Radio 3...

Following the extension of BBC Arts’ Culture in Quarantine and the recent success of Lockdown Live at London’s Wigmore Hall series throughout June, a series of four recitals will be presented live at Glasgow’s City Halls, and broadcast live on BBC Radio 3 as part of the Lunchtime Concert slot, from Tuesday 14 July to Friday 17 July. The series widens BBC Radio 3’s efforts to resume the nation-wide setting- up and broadcasting of live classical music performances in strict compliance of social distancing.

Similarly to the Wigmore Hall series, the Lockdown Live from Glasgow’s City Halls recitals feature exclusively solo and duo performances, involving artists based in Central Scotland - to avoid unnecessary travel. The performances will take place in an empty venue with no audience present, with a minimal set up involving one BBC Radio 3 producer backstage, a BBC sound engineer, one presenter inside the auditorium and one member of City Halls staff on duty - in strict compliance with the government’s social distancing guidelines and with more than two metres in social distancing.

Every concert, approximately one hour in length, will be broadcast live on BBC Radio 3 from 1pm and on BBC Sounds, and will be streamed live on HD video on the City Halls website.

The Lockdown Live from Glasgow’s City Halls series is part of the BBC cross-platform initiative Culture in Quarantine, bringing culture to people’s homes at a time of self-isolation.

Donalda Mackinnon, Director BBC Scotland,said “We know how much our SSO audiences, and those who listen at home via the radio, love their concerts so we’re delighted to help bring music live from our base at Glasgow City Halls over the next few weeks to Radio 3. Like many industries the creative sector is having a very tough time at the moment so it’s been fantastic that, working with a range of others in Scotland over the last few months, we’ve been able to help bring a wide range of artistic performances back onto our screens and airwaves.”

Alan Davey, Controller BBC Radio 3 and classical music, added “There is a real primal need for live music and the refuge and respite it gives our audiences - the response to our Wigmore Hall series has been tremendous. We know it also matters to musicians themselves to make this live connection again. We take our role as the leading live classical music broadcaster and sponsor really seriously and are grateful to the performers and our partners at City Halls for giving us the opportunity to continue to bring live music making back to different parts of the UK as soon as we can within government guidelines.”

Percussionist Colin Currie, who is performing on Friday 17th July, said, “‘I’m thrilled to be asked to perform in Glasgow City Halls, a venue I well know and love. Some of the final live music events I attended before the pandemic were in this building and to return there to make a mark as part of this city’s and the country’s return to performing is an honour and a privilege. Playing to an empty hall will be a new experience but I will try to channel my energies to envelope the wide community of music-lovers who are so keen and in such need of a fix of fresh music.”

All concerts will be available on BBC Sounds for 30 days after live broadcast at www.bbc.co.uk/radio3

Music when no-one else is near