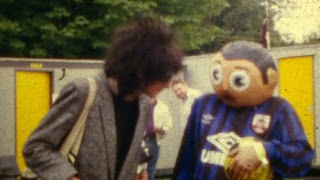 This past weekend should have seen us celebrating Glastonbury Festival’s 50th birthday line up. However, all is not lost as the BFI’s new online collection, Festival Fever, is available now for free on BFI Player...

What makes a music festival? Is it the noise, the spectacle, the people, the camping, the ritual of a mass gathering, even the weather, that’s before you add the live music acts themselves, legendary performances and the ‘you had to be there’ moments to cherish.

From deep-rooted folk traditions (Ancient Beltane Festival at Glastonbury Tor, 1966, The Box, Plymouth) to youth culture happenings from trad Jazz (Jazz Band Ball, 1963, North East Film Archive, to punk Self Conscious Over You, 1980, Northern Ireland Screen Digital Film Archive) this new collection, a nostalgic celebration of music and arts festivals from across the UK drawn from the BFI National Archive and regional film archive partners, digitised with thanks to National Lottery funding, offers festivalgoers some solace to relive summer memories of festivals past.

From intimate village affairs to the early years of cultural behemoths like Glastonbury, the collection includes rare footage of the first (and now iconic) pyramid stage in 1971, Glastonbury Festival and the First Pyramid Stage (1971, The Box Plymouth), as well as Nic Roeg’s Glastonbury Fayre(1971). Available to BFI Player subscribers Roeg’s film documents the likes of Fairport Convention, Family and Terry Reid from Glastonbury’s second year. The Festival Fever collection features music performances running the gamut of folk (The Sidmouth Folk Festival, 1970, The Box, Plymouth, Scunthorpe International Folk Festival, 1969, Yorkshire Film Archive) to pop (Frank at 'Cities in the Park', 1991, North West Film Archive at Manchester Metropolitan University) to rave (Rave, 1997), and with a special focus on the 1960s and 1970s, these documentaries, local news reports and home movies remind us of the simple pleasures of letting our hair down. 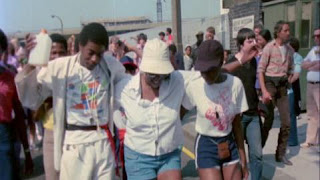 Westward TV sponsors the festival in this news report with music lovers from across the UK and beyond gathering to celebrate jazz, trad and free, including notable interviews with some of the greatest jazz talent including Johnny Dankworth and Humphrey Lyttelton.

By 1963, Suffolk's Aldeburgh Festival was very much on the world music map but the annual invasion of 'foreigners' didn't go down well with all the locals. Anglia TV cameras visited Aldeburgh to catch Benjamin Britten overseeing rehearsals for his adaptation of John Gay's 'The Beggar's Opera' and canvass opinion on the impact of the Festival on the town. Whilst many were keen to sing its praises, some local youngsters thought the Festival "square" preferring to listen to "Pop" music.

International folk bands and troupes put on an act at Sidmouth. The Folk Festival started in 1955 as a week-long seaside celebration of music, dance and song and was founded by the English Folk Dance and Song Society. It expanded and was renamed the Sidmouth International Folklore Festival. Funding issues stopped the international version of the festival but in 2005 Sidmouth Folkweek was relaunched by popular demand.


Glastonbury Festival and the First Pyramid Stage (1971) The Box, Plymouth

Rooted in the hippie culture of peace and love, Glastonbury changed its dates to coincide with the summer solstice in an attempt to harness the positive energy. In this rare news report from the Festival’s second eyear, theatre designer Bill Harkin designs the very first iconic pyramid stage, building it above the Glastonbury Abbey and Stonehenge ley line to heighten a festival-goer’s experience. 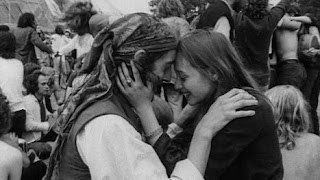 Mud and music at Wigan's answer to Woodstock captured in this evocative amateur film. Notable for the miserable weather and gallons of mud - impressive even by Glastonbury standards - the Bickershaw Festival was also notable for its quality line-up. Acts such as The Grateful Dead, Captain Beefheart, Hawkwind and The Kinks were a great attraction,

Fly your freak flag high with this far-out news report shot at the Great Western Express Festival, a live rock music extravaganza which caused controversy with the local Leicestershire residents one weather-beaten weekend in May 1972.

Free food' and 'free religion' is the mantra of some festival goers ahead of the Rolling Stones' appearance topping the bill at Knebworth in the long hot summer of '76. Anglia News cameras caught up with some of the fans who were making the most of the hot weather, arriving to set up camp on the sun drenched estate. The landlord of the local Lytton Arms was also hoping for a good festival having upped his beer and wine stocks to meet demand.

Witness The Outcasts at their incendiary best in this thrilling concert film. Organised by Terri Hooley's Good Vibration Records, this legendary gig found almost 1800 people cramming into The Ulster Hall to see local band and leading figures of Ulster’s underground punk scene , The Outcasts. The events depicted here were later immortalised in the 2013 film GOOD VIBRATIONS.

West London echoes to the sound of reggae and steel pans in this kaleidoscopic and colourful record of the 1980 Notting Hill Carnival. The documentary invites you into the busy streets, following floats and popping into community centres where performers prepare. The diversity of the crowd really makes Carnival, seen here soaking up the atmosphere and moving to the beats of the parade.

Partying like it's 1997. This documentary follows a rave DJ instigator rigging up decks in abandoned warehouses, a nosebleed 'techno tourist' who chases the hardcore around Europe to go with the flow and a girl addicted to... partying.

Festival Fever is now available to watch for FREE on the BFIplayer - https://player.bfi.org.uk/free/collection/festival-fever