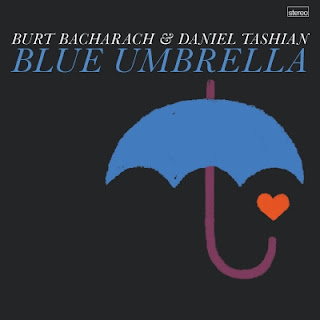 Burt Bacharach and Daniel Tashian have announced their Blue Umbrella EP is due for release on July 31st on Big Yellow Dog Music. Listen to the first track from it, Bells of St. Augustine...

Recorded in Nashville, Blue Umbrella features Daniel on vocals and Burt on piano backed by some of the city’s finest musicians (Dennis Crouch, Fred Eltringham, Tom Bukovac, Jim Hoke). Filled with rich, jazzy chords that underpin restless, dynamic melodies and graceful, understated lyrics, the EP is a true blend of the songwriters' personalities, sensibilities and spirits. While refusing to settle for nostalgia, Blue Umbrella cements Bacharach & Tashian as a 21st-century ampersand worthy of the Brill Building.

“Daniel’s instincts are always right on target,” says Bacharach. “Musically, he’s got the chord before I’ve got the chord, when I can't find the chord. I appreciate it so much. He hears impeccably. He brings to the table a great lyric sense. He tells a great story. He also brings some valuable music stuff. It's a really collaborative thing.”

“There’s nothing I'd rather do than make music with Burt Bacharach,” adds Tashian. “They say you shouldn't meet your heroes because they'll disappoint you. But I haven't found that about Burt.”


Burt Bacharach is one of songwriting’s most honoured and successful composers. A recipient of three Academy Awards, two Golden Globe Awards, The Library of Congress Gershwin Prize for Popular Song and eight GRAMMY Awards (including the 2008 Lifetime Achievement Award and 1997 Trustees Award), he revolutionized the music of the 1950s and 60s. Daniel Tashian joins an esteemed list of lyricists to partner with Bacharach, including Hal David and Elvis Costello.