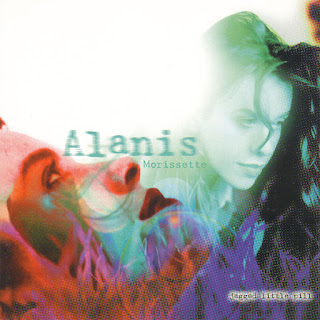 Jagged Little Pill turns twenty-five this year and Steve Taylor-Bryant has always stated that it is one of the greatest records ever made. Here is his thoughts on the Alanis Morissette classic...

I come at music from behind my drum kit most of the time. I imagine playing to the song I’m listening to, I picture myself onstage with the artist and ask myself one question, am I having fun? This may sound pretentious but it’s not, I know I was never good enough to play for my musical heroes, I’m not on an ego trip it’s just that’s how my mind works. Then it’s the lyrics, do they speak to me? Do they convey some kind of message? Do they tell me a story, or emotionally touch me in some way? Then it’s the voice. The voice is important to me because none of the questions I’ve just asked myself to get answered by a generic pop whine. It’s no surprise that my favourite singers of all time answer all these questions. Billy Joel, Eddie Vedder, Bjork excite the child drummer in me and touch the emotional core of the adult I’ve become. I didn’t know any of this when I was younger and my pre-1990’s record collection is an embarrassment in the main. No, this revelation happened upon me in 1995 when I listened to track one of Jagged Little Pill by a Canadian singer I’d never heard of; Alanis Morissette.

All I Really Want was the start of awakening in me. It was a mixture of styles and lyrics like I’d never heard before but that made perfect sense to me immediately. Before I knew it I’m air drumming and lost within my Wembley Stadium imagination having the time of my life sat behind my kit whilst this angel of music was running up and down the stage in front of me stopping only to play a harmonica for a bar. It was the perfect start to one of those rare moments in life when an album changes your life in some way. All I Really Want is still one of my favourite songs of all time and regardless of where I am when I hear it, I will stop and listen, I will wave my arms around, I will get emotional.

You Oughta Know was the song that led to some of my friends understanding what the hell I was on about. It was the song from Jagged Little Pill that had the most radio and television play and playing it for real a few years later was one of the highlights of my time as a drummer because it’s impossible to not love that drum riff, it’s impossible to have fun being the vocalist on that song, it’s almost impossible to find a bass player as good as Flea, yes THAT Flea, though, fair play Mark wherever you are that was incredible watching your fingers go nuts on that.

Perfect is the first chance on Jagged Little Pill to realise that Alanis Morissette is actually a very talented singer with a hell of a range. The song starts off so melodic and softly that it almost lulls you into a false sense of security because lyrically it’s a nasty little tale about overzealous parents that live their lives through their children. Its both disturbing and genius in equal portions and by the time you come to the bridge you are already disturbed and that last couple of lines should give you chills…

We'll love you just the way you are
If you're perfect

So, now you are definitely emotionally broken we move on to yet another highlight of the 1990’s not just Jagged Little Pill, Hand in My Pocket. There isn’t one of you that didn’t sing along to this when it was released, yes even you! It is also the song that described most of us at that time. We were young but thought we knew everything; we were happy because we didn’t actually know everything and so nothing had removed that sense of optimism we had. This song is written by and sung by an artist who is just 19 years old and yet its wise beyond its years.

Right Through You is another truly magnificent track. It excites the drummer, and tells a story, and makes me glad I am not a woman if I am totally honest. In the enlightened world we are in now where women’s rights and treatment are correctly at the forefront of everybody’s mind here’s a song from the mid-90’s explaining then what we are only just realising now.

Despite the utter darkness in some of the lyrics on the album thus far Forgiven is the first song that has the feeling in its sound that match the lyrics. It’s the heaviest song so far, both in style and content.

“I sang Alleluia in the choir
I confessed my darkest deeds to an envious man
My brothers they never went blind for what they did
But I may as well have
In the name of the Father, the Skeptic and the Son
I had one more stupid question”

Bringing the confessional and the church into your mainstream song is brave but aside from that it’s a stylish song, the plucked almost flamenco guitar underneath the heavy rock adds something to a chorus that musically could have been generic but was now elevated. Vocally Alanis is at her very best throughout all the style and key changes and my word this song is powerful on so many levels. Yet another favourite.


You Learn is the first song that musically sounds like I have heard it before. It is a fusion of late 80’s pop and funk with a dash of early 90’s rock. Its melodic and almost follows the rules of a chart-topping song. That is probably done in some tongue in cheek way as nothing on the album follows any rules really, but it’s the song that contains the album’s title, it’s the one that sounds the most commercially acceptable by that days standards and… actually this is her Trojan horse isn’t it?

The lyrics in Head Over Feet are pretty much how love works in reality, its uncomfortable and you don’t think you deserve it and so when you meet someone who does love you, you fall hard despite thinking you aren’t deserving. It’s a very clever, quite lovely pop rock song.

Mary Jane is a beautifully put together piece of music with lyrics that have divided the opinions of myself and some friends. I am in the school of thinking that thinks Mary Jane is women who try too hard to please others despite any abuse or mistreatment that comes their way, others believe it is about drug addiction. Either way it is a haunting vocal over a fantastically musical piece. Its emotionally constructed and I don’t care who is right, I just hope Mary Jane is okay. Its rare a song can do that to me.

Ironic is probably the song that most people know Alanis Morissette for, and it's actually my least favourite track on the album [well, isn't THAT ironic... - Ed.] It’s the most played in my memory, it was everywhere and that probably has a lot to do with it, it has its own Wikipedia page because of the argument over whether its ironic or not and I don’t think that’s helped, its also the song on the album that doesn’t answer any of those questions for me as mentioned in my introduction. A rare blip in a so-far perfect record.

Not the Doctor is another one of those tracks I have labelled my favourite on this album, how many favourites can I have? Not the Doctor is a fantastic look at co-dependence done musically and speaks to me on so many levels due to my own past in many relationships that were like this with people, substances, drink, etc etc…

Wake Up closes out an extraordinary album in a way that answers all those questions I set in a blaze of musical glory. It’s a story of too many of you out there that don’t want to take a risk, that like things the way there are. Why should you vote, why should try and change for anyone or anything, your little life is perfect as it is? Well its not and here is a nineteen-year-old girl telling you to wake up so it is time to start listening...

Jagged Little Pill is an album that makes me use a word I don’t really use as its one that doesn’t seem to have much meaning anymore, but that word is iconic. It is a game changing album in my opinion, it raises the bar of what you can do lyrically and the delivery system which you can choose to deliver those lyrics. What Alanis and Glen Ballard managed to produce is nothing short of miraculous. It is most definitely one the best albums ever recorded let alone just of the decade it was born in. It touches on so many subjects that you just don’t expect in an album of music, certainly not in album as popular and as widely selling as Jagged Little Pill, it is constructed by top musicians who know exactly what beat or note goes where, and vocally there is not many singers that could match Alanis on this record. Her voice lives and breathes the stories she is telling. You can disagree with me if you want but be warned if you do, I will pity you because you just didn’t ‘get’ it and that makes me sad.