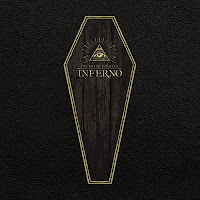 In an effort to further her musical education, Susan Omand has been set "homework" of listening to albums released after the 1980s that she has missed out on. This week she starts up My Brother's Blood Machine... wait, what?...

I had never even heard of The Prize Fighter Inferno so, before I even listened to the album, I did a bit of research. i.e. googled it. I read the first line of the search results and AHHHHHHH! That’s why.

To quote Wikipedia The Prize Fighter Inferno is "an acoustic/electronica solo project of Claudio Sanchez, the lead singer and lead/rhythm guitarist for the band Coheed and Cambria." Now, anyone who has been paying attention to such things will know that Coheed are Mr Ames’ favouritest band in the whole world, so that’ll be why this album is on the list.

At this point I stopped reading because, having been immersed in the lore of Coheed for a couple of years now, I knew there would be a story to this album and I wanted to listen to it cold first, just as an album, without getting involved in the narrative. Don’t worry though, we shall return to the narrative element later.

On a first listen, then:

The Going Price for Home – An interesting start with an electronic noise overlay to a very dark chord motif but then it disappears into musical mediocrity. For me the song feels quite vapid and dance charty with plinky toplines and repetitive bass. It seems an odd choice for an opening track, so I read the lyrics to try and get the “hook.” The words are trite and angstilly (yes it’s a word) poetic but there’s not the “whoa” moment that I expected.

The Fight of Moses Early & Sir Arthur McCloud – bodes much better right from the off with complex guitar noodling giving an almost Spanish/South American feel to it. The lack of percussion actually adds interest, taking it out of the cliché, and the multi layered vocals add richness.

Our Darling Daughter You Are, Little Cecillia Marie – from Spanish sounds to easy listening early seventies prog. This track has the feeling of advancing the story in the way a recitativo accompagnato does in an opera, no real frills or complexities and an almost monotonic (in a good way) speech patterned delivery.

A Death in the Family – in high contrast to the previous track, a very 80s sounding track that would also be very much at home tonally in the latest resurgence of synth pop. But I get the feeling the bright and happies envelope a much darker core to the lyrics; how very REM [this may not be a good thing – Ed].

The Margretville Dance – continues the synthy stuff but with a much beefier bottom line. Think Justin Timberlake with added glockenspiel.

Accidents – Ah, now we’re talking. An industrial soundscape feel that layers up superbly with other samples to give an undercut to ambient guitars that remind me very much of Groove Armada [this is a good thing – Ed]. This is electronica done intelligently, with layering and exciting noises. Favourite track on the album so far.

Run, Gunner Recall, Run! The Town Wants You Dead! – OK, not what I expected at all. A strict tempo acoustic number that goes full on blue-grass, complete with harmonica. Interesting.

Wayne Andrews, the Old Bee Keeper – Interesting orchestration with smooth strings under a ploddy guitar adding an extra layer to a simple song. I do like the twangy guitar though.

The Missing McCloud Boys –I hate to say it, the falsetto is starting to grate on me, which is a shame because I usually love Claudio’s voice. Unfortunately, there’s nothing notable in the music to distract me from it this time.

Easter – There’s a reverberating bum note in the bassline of this one [probably deliberately – Ed] and it’s probably the best thing about the song, which is all singer-songwriter ballady. Just waiting for the “stand up from the stool” key change in the middle.

78 – Ah now, this is intriguing. It’s got a similar feel to Accidents, if anything it’s a bit heavier, and there’s a cool jazziness to it with a lot of counterpointed rhythms under the atonal vocals. A pity it’s the final track on the album as we could have gone somewhere from here I think.


Hmmm. Maybe the story behind the album will add the wow that, for me, is currently missing. Good ol' Wikipedia to the rescue once again:

"Well, this story actually acts as a prequel to the Amory Wars," the center of the Coheed and Cambria mythology, Sanchez explains. "The Inferno character, who appears in the Coheed concept as a man named Jesse, dies in the Good Apollo: Volume One, and is resurrected on present-day Earth. So he leaves the solar system that the story takes place in, and gets resurrected in the present day. But before he can tell the story of the Amory Wars, he needs to tell the story of the Blood Machine."

"The Blood Machine revolves around three families, one being the Bleam family, who are our horrific sort of 'Texas Chainsaw Massacre' family," he continued. "There's the McCloud family — where we have our main character, Cecilia — and the Early family. And [Cecilia's] love interest is the son of that family, Johnny. And there are so many subplots. One, for example, talks about how Cecilia's father happens to molest her, and eventually she can't take it anymore and tries to convince Johnny to leave with her. She steals her two brothers, who happen to be twins, and Johnny decides not to go. So she ends up running away with the twins into the woods, where she meets the Bleam family."
Sanchez said that there are two Bleam brothers — Long-Arm and Butchie — who are horrific monsters. "Their mother happens to be crazy, and she ends up telling these two kids that 'God has come to me with a higher calling for you — you need to be the new Death,' and she tells them that they have to go out and collect souls for God," he explained. "And so, out of their mind, they're like, 'OK, so when a body dies, how do we get the soul out of it?' They construct this Blood Machine, which basically tears a body to shreds, and they think that releases the soul."

OK, that was… enlightening… ish… what? All of that completely passed me by lyrically I think; maybe because I'm not usually one to listen to song lyrics or maybe because I haven’t listened to Good Apollo 1 at all yet so the plot for this one hasn’t anything to hang off because I don’t know the character. In any case, I must admit that I didn’t get this album nearly as much as I did the other Coheed albums that I’ve listened to. Musically, for me, it’s a bit, well, bland overall, with one or two exceptions, although I do seem to have used the word “interesting” quite a bit in my track-by-track but, thinking back, it’s more of a “that’s nice” interesting rather than a “ooh engaging” interesting in most cases – damning with faint praise, I know. My Brother's Blood Machine should have piqued my curiosity, but I just couldn’t find an “in” for it so I’m afraid you can’t count me as educated this time. I guess I may have been spoiled by what has gone before but I really expected more, I expected to be blown away and hooked from the start, especially with such intriguing song titles. And I just wasn’t.