Turn That Noise Down - Madonna 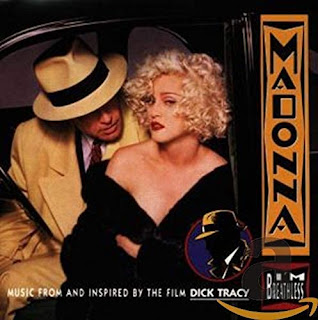 So many well-known albums turn 30 this year and Steve Taylor-Bryant and Susan Omand travel back to 1990 to revisit some of the sounds of their youth that made parents shout "Turn that noise down!" This week, Susan gases about I'm Breathless...

Back in 1990, Madonna was breathless. No, not as in asthmatically wheezy (although her film career could well have been described that way), she was Breathless Mahoney, the gangster’s moll to Warren Beatty’s Dick Tracy in the kitschy film of that name and the I’m Breathless album came from that; not exactly a soundtrack, although some of the songs did make on screen, but it was most definitely “inspired by” the film and marked a notable departure (the first of many) for Madonna from the musical styles that had gone before, like her incredible studio album from the previous year, Like a Prayer.

As an album it really should have been better regarded than it was. There were two world-wide hit singles on it; Hanky Panky was the first and very much inkeeping with the “coquettish” burlesque jazz pop of the rest of the album. In true “musicals” style, there were also duets with other stars from the film, Beatty himself on Now I’m Following You as well as Mandy (Inigo Montoya Homeland) Patinkin on What Can You Lose, and there were also songs written by that doyen of the Broadway musical, Stephen Sondheim. It’s all very cutesy, thirties, Betty Boopy stuff – fluffy and fun but ultimately forgettable, much like the film itself.

But it’s the other single from the album that has gone down in history as THE Madonna song of all time. The one that, mention its name, and everybody, and I mean EVERYBODY, will start lip synching the words and doing that “dance” with their hands, thanks to the video directed by David Fincher.

So... don't just stand there, let's get to it, strike a pose, there's nothing to it…