Turn That Noise Down – Billy Idol 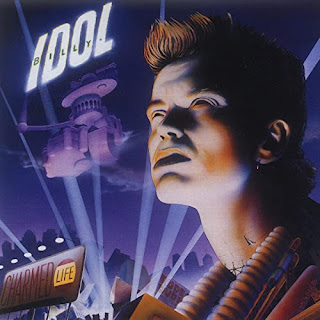 So many well-known albums turn 30 this year and Steve Taylor-Bryant and Susan Omand travel back to 1990 to revisit some of the sounds of their youth that made parents shout "Turn that noise down!" This week, Susan Omand leads a Charmed Life...

It’s a little-known fact [Oh, is it really, aye? – Ed] that I had* a bit of a thing for Billy Idol back in the day; the blond spikes, the pouty sneer, the leather… [OK, TMI now – Ed] however it should be noted that “back in the day” for me was 1983 and I was 14/15 so that’s my excuse and I’m sticking to it [resists comment - Ed]. As a result, I played the album Rebel Yell, which came out that year, until I could pretty much sing it start to finish, backwards and upside down. Similarly for 1986’s Whiplash Smile and his two Best ofs, Vital Idol and Idol Songs. But, for some reason, I seemed to wander off the music trail, not just for Mr Idol but in general, once the 80’s turned into the 90’s so Charmed Life, his 1990 album, passed me by and this is my first listen through.

The first two tracks on the album, The Loveless and Pumping on Steel, are very definitely “back in the day” Billy Idol; you could easily substitute in the lyrics for White Wedding and Flesh for Fantasy respectively. Prodigal Blues is where it starts to go… not wrong as such, but very different, as it starts to sound like the clean arena pop rock of Simple Minds rather than the rocking sleaze that I would expect from Idol. This mix of old and, for that time, new continues throughout the album, with Trouble With the Sweet Stuff, and Love Unchained reaching towards the Simple Mindsy pop rock that was prevalent at the turn of the decade, while tracks like Cradle of Love and The Right Way hark back to the old fashioned Billy Idol rock and roll sound I was used to. Talking of which, there are also a couple of stonking covers on the album, with The Doors’ LA Woman and Jody Reynolds’ Endless Sleep getting the full sneer treatment.

But there’s a couple of real outliers in the track list. One, Mark of Caine, has a weirdly hypnotic 80s synthpop guitar sound coupled with totally unexpected speaky bits that’s not rap by any means, it’s just read out lyrics, but this makes it really interesting and probably my favourite track on the album for that reason.

And then there’s Licence to Thrill that really can’t decide what it is and neither can I. See what you think.