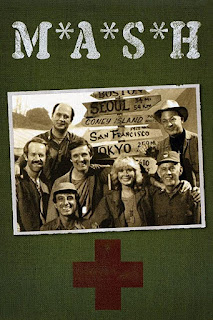 Inspired by our series of articles looking back at music released 30 years ago, Jimmy Hunter takes a step further back in time to give us a Song of the Day 1980. This week, it's all about life, liberty and the pursuit of happy hour...

In my mind the film came after the TV series. But that’s only because I watched the TV series almost form the start and never saw the film until much, much later. In fact, this record was a hit before I’d seen the film so I didn’t ever know it had lyrics. But I always loved the theme tune.

I am, dear confused one, talking about M*A*S*H. A TV series that started in 1973 and I loved until it’s last episode. Well perhaps I went off the boil with it for a while but as a teenager, I discovered the film and I’ve loved that too, ever since. The film, though, was made in 1970, some three years before the TV series.

Suicide Is Painless. A phrase that may be considered a trigger and would certainly get some people animated but the intention was to be utterly nonsensical. The film’s director, Robert Altman, wanted a song for a scene in the film and asked his son, 14-year-old Michael Altman, to come up with a lyric. And that he certainly did.

It wasn’t released until 1980 and it didn’t bother the US charts much but in Britain it was a No.1 hit. Because the Altman’s are British? I wouldn’t have thought so – it got airplay at the right time, much was being made of the TV show coming to an end for good and, with its popularity, well there was a good chance of it not being a flop.

Of course, by 1980 you’d expect an 11 year old record to have dated and I do believe it did, but at this point in 1980, many different musical genres were being carried over the airwaves. But if you don’t listen to the words, instead listen to the harmonies with the music, it’s actually a good record.

You won’t find the group though. Recorded under the name of The Mash, it was a bunch of sessions musicians and singers along with the writer of the music, Johnny Mandel. When I eventually watched the film, well, having the theme tune as part of it made less sense to me than perhaps if I’d seen the film first. But it doesn’t matter – it works and perhaps for that reason I always think of it as the theme as opposed to a piece of music “from” it. If you catch my drift [Do we ever?? – Ed]

Judge for yourselves. No video, just harmonies and acoustic guitars.