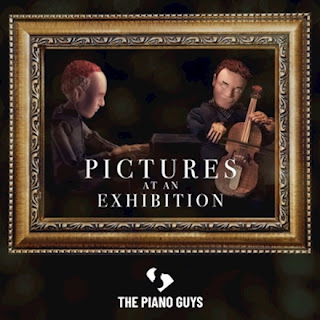 The Piano Guys have released a new video for their cello and piano arrangement of Mussorgsky's Pictures at an Exhibition and it is absolutely gorgeous. Watch this...

Originally recording Pictures at an Exhibition for their 2014 album Wonders, The Piano Guys have now re-recorded the Mussorgsky classic, which is available everywhere now. Years in the making, the new video features master puppeteer Márton Harkel as he performs as puppet versions of The Piano Guys' very own Steven Sharp Nelson on cello and Jon Schmidt on piano. With each puppet taking over 150 hours of handmade love to design and craft, the resulting video is the perfect companion to the track, which captures the excitement of art in all its forms.

Of the new video, The Piano Guys' Steven Sharp Nelson said, "We came across a social media post that shared a tourist's video of an extraordinarily talented puppeteer, Márton Harkel, who performs as a busker on the streets of Budapest. What caught our eye was his cellist puppet, as it was a near perfect copy of the puppeteer. And as he made the motions of playing cello, his puppet would mimic his movements with astounding musicality. It was captivating. It was like watching art come alive. We immediately imagined pairing his puppet design and marionette skills with our arrangement of 'Pictures at an Exhibition' — the mainstay of a suite of classical pieces written about art coming alive! And the timing of it couldn't have been better — as we're releasing it during a time when we can't film traditional music videos due to the current pandemic's safety measures. So this is our pandemic approved, proxy puppet's performance of 'Pictures at an Exhibition'!"

Márton worked for over 200 hours to handcraft these puppets so that their articulating fingers, and a multitude of hinges and joints could be “in concert” with the music. Notice the care he takes to see that they are doing their best to even play the right notes. The best part of this story? After Márton finished creating the puppets and prepared to film, he realized he couldn’t make them come alive alone. He needed another puppeteer. He hired Napsugár Trömböczky, a lovely and talented young lady. As they began working together, their interest in the project and the puppets took a back seat to their interest in each other! In ONE WEEK they were engaged and are now married.