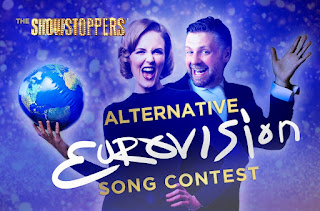 Missing your annual Euro-dazzling extravaganza of pop prowess? Dig out those tiaras and fluff up those flags and join in with The Showstoppers’ Alternative Eurovision Song Contest online this Friday. Barnaby Eaton-Jones explains more and chats to one of the Showstoppers, Pippa Evans...

“Expect a hilarious evening complete with commentary from Tom Allen, a host of Celebrity Judges in the form of Christopher Biggins, Arlene Phillips, London Hughes and Claire Sweeney, and some special Guest Stars like Josie Lawrence and Mike McShane!”


If you’re a fan of television’s ‘Whose Line Is It Anyway?’ and have always marvelled at the part where they make up a song off the top of their heads, then you’ll this talented bunch who just take it to another level.

‘Showstopper! The Improvised Musical’ has been a rip-roaring success since the show started in 2008, with eleven sell-out years at the Edinburgh Festival Fringe, two West End runs, an Olivier award and a BBC Radio 4 series.

So, who better to perform an Alternative Eurovision Song Contest than these guys? Yes, that’s right. It might be alternative but it’s still high camp, coupled with over the top production values, musical merriment and interactive voting – just like the real Eurovision. But intentionally funny and all from isolation.

You can watch along in the comfort of your own home and see how brilliant these performers really are. If you can’t wait until then, here’s a 20-minute truncated version of one of their improvised Edinburgh shows – with the title Pit Perfect. It’s a work of comedy genius.

The Alternative Eurovision is in aid of The Care Workers Charity, who’s objective is to support current and former care workers with one-off crisis grants. You can find more about their worthwhile fundraising here: https://www.thecareworkerscharity.org.uk/

I was lucky enough to speak to the ludicrously talented Pippa Evans to give a bit of background to the core show and what this Eurovision malarkey is all about. 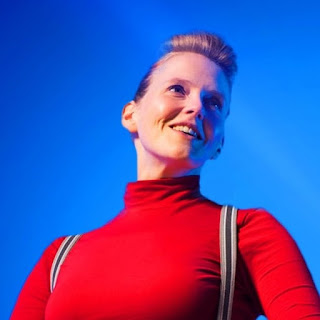 Barnaby Eaton-Jones (BEJ): Pippa, hello! So, tell me, how did Showstoppers itself come about?

Pippa Evans (PE): Showstopper was created by Adam Meggido and Dylan Emery, who met working with Ken Campbell on an improvised Shakespeare project. Ken wondered if it was possible to improvise an entire West End Musical and Adam and Dylan set out to see if it was possible. Over 1400 shows and an Olivier later, we have decided it is.


BEJ: It's a genius idea to do an improvised Eurovision - what's been the biggest challenge of trying to organise this?!

PE: Oh my goodness - the biggest challenge is getting all the songs written and recorded. We are switching from our usual skillset of live, improvised musicals to written, recorded pop songs. Luckily, the improvisers mindset is to be open to new ideas and explore new worlds, so we are really impressed with the work all The Stoppers have done. It’s going to be sensational!


BEJ: I come from a background of short-form improvisation and I'm always amazed at the skill and agility something like Showstoppers delivers - it's like a mad combination of the two. What were your first forays into improvisation and is it something instinctive for you or do you feel you've grown as a performer over the years?

PE: I started in short-form games, back in 2005, after being invited to try out for a group I met at the Edinburgh Festival. Someone had just left the group and so there was a space (and that someone who left was Ruth Bratt). That group soon imploded (not because of my joining) but it gave me the bug and I haven’t looked back.

Improv is something that I have an instinct for, but instinct will not get you anywhere alone. Doing great improvised musical theatre means you need to be a great improviser, which takes years of mostly painful practise in front of audiences. You also need to have other honed skills like acting and singing. I studied Drama at University and have been singing all my life, so I always knew that would be a part of whatever I ended up doing. I am glad that Showstopper came along when it did as it was a project that spoke to all my passions - improv, musical theatre, comedy and showbiz! 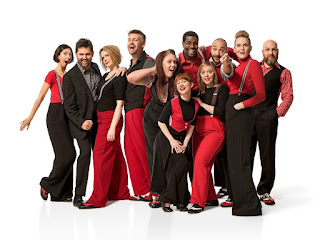 BEJ: I recall you bring brilliant on 'Fast and Loose' - was it easy to record and how did you keep the energy up?

PE: Fast and Loose was not easy to record - each record was 3 hours long, freezing cold and involved a lot of stopping and starting, which live improv, of course, doesn’t do. It was hard to keep the energy up, but then we discovered that Hugh Dennis kept chocolate under his desk and so that was the end of that. I loved doing the Sideways Scenes with Justin and Marek - they were the most fun!


BEJ: I'm currently writing an appreciation of 'Whose Line Is It Anyway?' and my main sadness is the sheer lack of female performers being used, whereas Fast and Loose had loads more - do you feel there's a bit more equality in the genre today?

PE: Yes, in terms of gender. The most celebrated improvisers in the UK right now include a lot of women (Cariad Lloyd, Josie Lawrence (of course), Rachel Parris, Ruth Bratt, Kayleigh Llewellyn, Maria Peters, Lauren Shearing to name but a few). In fact I coordinate a show with Julie Clare Productions at the currently-closed-but-soon-to-be-reopened-I-hope Boulevard Theatre called Yes Queens. The show features many of the top women in the UK improv circuit.

So equality is much better for women. Improv is still falling down in being an inclusive space for people of colour. Monica Gaga and Tai Campbell are doing excellent work with Hoopla Impro to get those doorways opened wider and we must never get complacent about that work being done.


BEJ: Do you watch Eurovision normally and do you think you'll be now trying enter as the UK entry next year?

PE: I love Eurovision and have such happy memories of watching it with my family as a kid. I thought Terry Wogan was so funny as he got more drunk throughout the night, commenting on each entry in his inimitable way. And now, with our Graham Norton, well it’s just such a hoot, isn’t it!

I would love to enter as Loretta Maine, a singer songwriter character I performed as for many years. I think she’d score some points. Mainly because everyone would be too scared of what would happen if she didn’t win.


BEJ: Thanks so much for your time and break a leg on Friday!


Thank you, Pippa Evans (and Barnaby!), for sparing some time in the run-up to what is certainly an epic feat of creativity and organisation.