News - Mushrooms: The Art, Design and Future of Fungi... 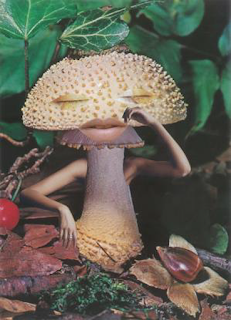 Somerset House in London has released a brand-new virtual tour of its exhibition Mushrooms: The Art, Design and Future of Fungi...

The exhibition explores the colourful cultural legacy of the humble mushroom and its powerful potential in the planet’s survival, as innovative designers experiment with the sustainable material of mushrooms in fashion, homewares and architecture.  Curated by writer and curator Francesca Gavin, Mushrooms: The Art, Design and Future of Fungi was halfway through its run when lockdown began, so for those who missed it in person, this virtual tour is the first chance that they will be able to see inside this original show and discover why the simple fungus fascinates us still.

Five works to look out for whilst virtually browsing Mushrooms: The Art, Design and Future of Fungi:

Beatrix Potter’s collection of mushrooms illustrations.  The show includes a selection of Potter’s watercolours, of which she produced over 300 before she made her beloved children’s books.  Her exquisite, scientifically accurate drawings of mushrooms form a significant contribution to the study of natural history and are still used by researchers today.

Carsten Höller’s spinning, solar-powered mushrooms.  A striking example of the acclaimed conceptual artist’s recurring mushroom motif can be found in his Pilzkoffer (Mushroom Suitcase) which sees small casts of the hallucinogenic fly agaric mushroom revolving on mechanical stands inside a suitcase, powered by solar energy situated above.

Adham Faramawy’s hypnotic film.  Faramawy’s psychedelic piece discovers the mysticism surrounding the mushroom, inspiring artists through the generations.  Shown in the round in the exhibition, the full feature will be shown from 13 – 19 May as part of Somerset House’s weekly Pause series.

Seana Gavin’s hand-cut collages of mushroom-human hybrids (see the picture at the top of the article).  Gavin creates collages of fungi-filled worlds featuring imaginative anthropomorphic mushroom characters and architectural structures.  She has also hosted a collage making masterclass, which is currently live online to enjoy at any time from home.

Shoes and shades made from mushrooms.  Set to transform design and manufacture in the future, mycelium (an underground fungal mass - mushrooms are the fruiting bodies of mycelium) is used as a sustainable material for shoes from Belgian shoe designer Kristel Peters and for pendant light shades from Sebastian Cox and Ninela Ivanova. 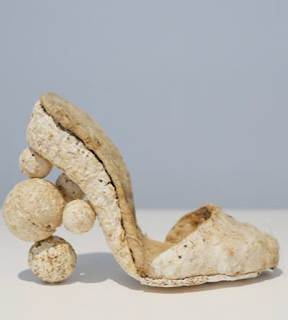 Somerset House is London’s working arts centre.  Its central London site is currently closed to the public, but its offer of inspiring contemporary culture can still be found online.  A summer-long digital programme – entitled I Should De Doing Something Else Right Now – includes live streams of new commissions from its resident artists, ordinarily based inside Somerset House Studios; making masterclasses for all ages to get involved, creatively recycling household items; workshops aimed at creative professionals on how to cope through the crisis, and new cuts of content from its archives, bringing the best of Somerset House at home.  Much of this online offering celebrates this year’s International Museum Day theme of Diversity and Inclusion.