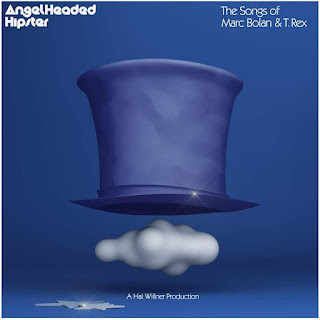 A wide-ranging cast of wizards and cosmic dancers have joined together to reimagine Marc Bolan’s work – sometimes in radical fashion – in AngelHeaded Hipster: The Songs of Marc Bolan and T.Rex, out on September 4th on BMGs label...

The collection features 26 songs culled from Bolan’s vast body of work released as T.Rex and Tyrannosaurus Rex from 1968-77, including Jeepster, Bang A Gong (Get It On), Ride A White Swan and beyond.

Marc Bolan was many things to many people – a folk-pop troubadour, Glam Rock’s metal guru, a pop star who burned as bright as any, a brilliant guitarist, style icon, poet. He has been famously cited as a major influence by some of the biggest names in music from David Bowie to Johnny Marr. He died in 1977 aged just 29, after a car crash in London.

After his passing, many of the artists who knew Willner best posted tributes to his singular spirit, including Elvis Costello, Bono, Tom Waits, and Nick Cave, who praised Willner’s “limitless imagination” adding “Hal was our visionary, our ringleader, always working against reason itself, armed with a deep love and bottomless knowledge of music.”

Willner, who referred to AngelHeaded Hipster as his ‘White Album’, was eager for everyone to hear these beautiful songs and to start thinking about Bolan and T. Rex again. This album is a testament to Hal’s spirit.”

The project was conceived and executive produced by Bill Curbishley and Ethan Silverman, with Kate Hyman, who had the creative vision to ask Hal to produce it.

The many sides of Bolan are explored as each performer celebrates their favorite version of him. That includes mining his incendiary, imperial pop star albums Electric Warrior and The Slider, harking back to his days with Steve Peregrin Took in Tyrannosaurus Rex (the band that bridged his acoustic folk period and the electric awakening of T.Rex), and reflecting on his later records and comeback hit ‘I Love To Boogie’ from his final album Dandy In The Underworld.

In true Willner fashion, the album’s title was inspired by Allen Ginsberg’s poem Howl: “angelheaded hipsters burning for the ancient heavenly connection to the starry dynamo in the machinery of night,” a line heralding the coming rock ‘n’ roll revolution in the wake of Elvis Presley, an essence that Bolan embraced and reinvented.

AngelHeaded Hipster: The Songs Of Marc Bolan and T.Rex tracklist