News - Glastonbury on the BBC 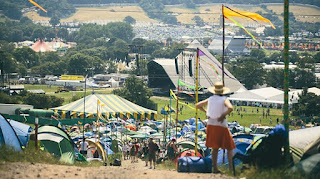 From Thursday 25th to Monday 29th June, when the 50th anniversary of Glastonbury Festival was due to take place, the BBC will be bringing the spirit of Glastonbury to viewers at home with The Glastonbury Experience across BBC television, BBC iPlayer, BBC radio and BBC Sounds...

Over the weekend, BBC Two, BBC Four and BBC iPlayer will show classic Glastonbury performances in full from some of the biggest artists in the history of the festival, including Adele (2016), Beyoncé (2011), David Bowie (2000), which will be the first time that performance has ever been broadcast in full on television, Coldplay (2016) and Jay-Z (2008).

The Glastonbury Experience will be led on BBC Television by three 90 minute live programmes in prime time on BBC Two - one for each night of the main Glastonbury weekend, Friday 26, Saturday 27 and Sunday 28 June. Jo Whiley and Mark Radcliffe will present Friday’s programme and Clara Amfo and Lauren Laverne will present on Saturday and Sunday. The programmes will celebrate some of the festival’s greatest performances since BBC coverage began in the 90s, with unique acoustic performances alongside rarely seen and triumphant archive moments. Artists featured will include:

BBC Two and BBC Four will broadcast a series of previous sets in full across the weekend, including from Adele (2016), Beyoncé, (2011), David Bowie (2000), Coldplay (2016) and Jay-Z (2008). BBC Four will also broadcast three additional programmes, featuring footage from some of the best acoustic performances that have been filmed in the BBC compound throughout the history of the BBC’s coverage of the festival including from Ed Sheeran, Dua Lipa, Kano, Leon Bridges, Patti Smith, Richie Havens and Youssou N’Dour.

BBC Two will also dedicate a special programme, introduced by Jo Whiley and Mark Radcliffe, to Glastonbury’s famous Sunday afternoon ‘Legends’ slot - which is played by a different established, respected and much-loved artist each year of the festival and takes place on the Pyramid Stage. The programme, broadcast early evening of Sunday 28 June will feature lots of gems from many of the legendary artists to have played in that much loved slot at the festival. 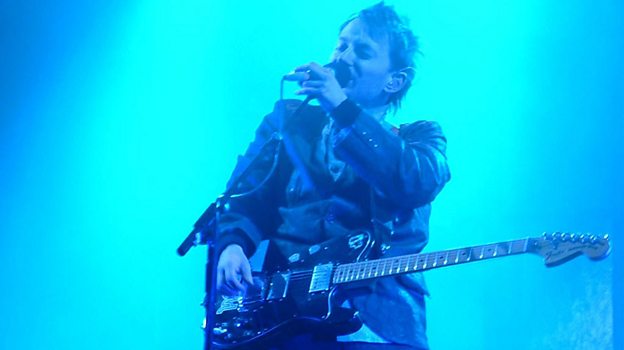 On Thursday 25 June on BBC Four, Edith Bowman will introduce a broadcast of Julien Temple’s acclaimed film Glastonbury, which celebrates and documents the history of this famous festival. Concert footage, interviews, archive and home video collected from attendees themselves combine in this film to capture the essence of Glastonbury. Musicians featured in the film include The Velvet Underground, Radiohead, Björk, Primal Scream, Pulp and, for the time on this new cut, Dizzee Rascal, Patti Smith and Amy Winehouse amongst many others.

All programmes will be available to watch live and on-demand on BBC iPlayer.
BBC iPlayer will become the home for Glastonbury lovers, with a brand new pop-up BBC Glastonbury channel, bringing viewers back-to-back iconic sets and highlights from past festivals. From 10am on Thursday 25 June until late Monday 29 June, fans will be able to relive highlights including Ed Sheeran’s headline performance from 2017, Christine & The Queens knockout debut in 2016, Florence + The Machine conquering all in 2015 and LCD Soundsystem’s epic Other Stage set from 2016 as well as a host of hidden gems from the BBC’s TV coverage and acoustic sessions. BBC iPlayer will also allow all viewers to relive classic moments whenever they want, with over 60 historic sets available to watch on-demand such as George Ezra (2019), The Killers (2004), Lewis Capaldi (2019), Radiohead (1997), Foals (2019), The XX (2017), Lana Del Rey (2014), Primal Scream (2011), Christine & The Queens (2016), The Chemical Brothers (2019) and Billie Eilish (2019). 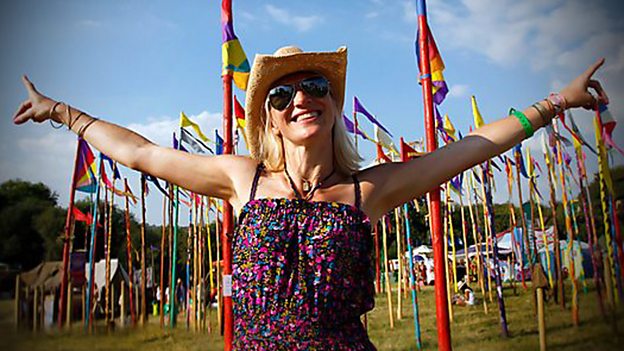 BBC radio is not missing out on the fun either. On BBC Radio 2, long-time Glastonbury-goer and presenter Jo Whiley will build up excitement ahead of the Glastonbury Experience every evening from Monday 22 to Thursday 25 June (8-11pm). This special series of programmes will be packed full of Jo’s memories of Worthy Farm, as well of those of her fellow Radio 2 presenters and listeners.

Zoe Ball will be bringing some Glastonbury magic to listeners in her Breakfast Show on Radio 2 on Friday 26th June (6.30-9.30am)

Jo will return to the airwaves on Saturday 27 June (4-6pm) with a selection of archive tracks recorded at previous Glastonbury festivals, plus interviews with special guests.

On Sunday afternoon, Sounds Of The 70s With Johnnie Walker will reflect on the Glastonbury performances from that decade, before Jo returns from 5pm-7pm to pay homage to those who have graced the Pyramid Stage to play the iconic Sunday afternoon ‘Legends’ slot. Jo will speak to previous Legends about their memories of performing in that slot.

On Monday 29 June, Jo will reflect on this unique Glastonbury Experience in her evening show (8-11pm).

On BBC Radio 6 Music, daytime presenters Chris Hawkins, Lauren Laverne, Mary Anne Hobbs and Steve Lamacq will take part in a Glastonbury Throwback Thursday on 25 June - a trip down memory lane in celebration of the festival’s greatest moments from the last 50 years. Each show will feature archive tracks as well as listener requests - helping the audience re-live their favourite memories of Worthy Farm. 6 Music will also be playing archive tracks recorded at Glastonbury across the schedule and throughout the week beginning Monday 22 June.

Lauren Laverne will continue the festivities the following day in her morning programme on Friday 26 June (8.30am-midday) as she is joined by Emily Eavis. Plus Lauren’s People’s Playlist, in which Lauren picks the theme and the listeners pick the songs, will be dedicated to Glastonbury.

BBC Radio 1 will broadcast special daytime shows on Saturday 27 and Sunday 28 June (11am-3pm) which will showcase live performance from previous Glastonburys, in addition to a dedicated Glastonbury Essential Mix on Saturday 27 June (1-3am).

BBC Radio 1Xtra will look back at some of Glastonbury’s most iconic moments, from Jay-Z and Stormzy’s historic sets on the Pyramid Stage to Alex’s duet with Dave on The Other Stage in 2019.

On BBC Asian Network, all week starting Monday 22 June, Bobby Friction will re-live moments and performances from prolific British Asian artists including Asian Dub Foundation and Nitin Sawhney as well as more recent appearances including M.I.A and Joy Crookes. Then, on Thursday 25 June, Bobby will dedicate his entire four-hour show to Glastonbury, with guest DJ sets as well his own Glastonbury Experience mix, spanning the last three decades.

BBC Radio Somerset is broadcasting three special shows on the Friday 26, Saturday 27 and Sunday 28 June (6-10pm), highlighting the impact the festival has had on the county over its 50 year history. Presenter Andy Bennett will be broadcasting across eight radio stations (including Bristol, Wiltshire, Gloucestershire, Devon, Cornwall, Jersey and Guernsey) from some surprising locations in Somerset related to the event. He’ll be talking to the bands and artists who would have played at Glastonbury this year, as well as regular festival goers, the villagers of Pilton, and many of the people at Worthy Farm who put on this spectacular show year after year. 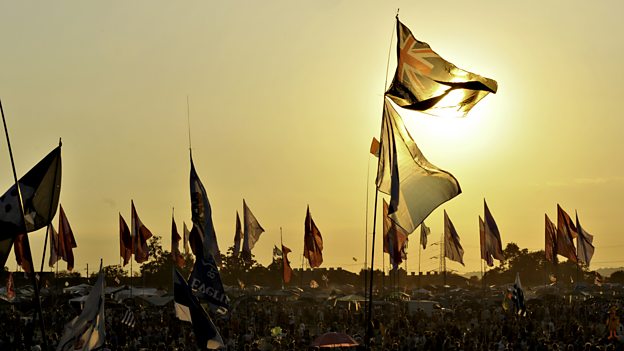 All programmes will be available to listen live and on-demand on BBC Sounds. BBC Sounds is also the place to easily enjoy top audio highlights as it will also bring together the biggest moments from BBC Radio’s coverage from across the week, plus, there will be over 20 archive performances for listeners to enjoy. Look out for All Day Glastonbury offers - curated collections of back to back sets - diving listeners straight into the biggest headliner, chill and dance moments from Glastonbury over the years. Plus, there will be a few surprise mixes from DJs who would have performed at Glastonbury 2020 too, which will be announced in the coming weeks.

Lorna Clarke, Controller, BBC Pop, says: “Glastonbury Festival has for decades been a huge moment in the BBC’s music calendar, thanks to Michael and Emily’s magical creation. Even though Worthy Farm can’t be full of thousands of music lovers this year, the BBC will celebrate with four days of memories and archive footage across TV, BBC iPlayer, radio and BBC Sounds, to give our audience a taste of the festival in their own homes.”

This year was due to be the 50th anniversary of the Glastonbury Festival of Contemporary Performing Arts. The festival, organised by Michael Eavis and his daughter Emily Eavis takes place at Worthy Farm in Somerset. It began in 1970 when, the day after the death of Jimi Hendrix, Eavis opened his farm for the first time to over a thousand punters. Glastonbury is now the largest greenfield music and performing arts festival in the world - with a site that is over a mile and a half in diameter. Each year, it hosts hundreds of thousands of festival-goers, who flock to see performances from the most famous names in music and immerse themselves in the vast range of performance that the festival has to offer.

Emily Eavis says: “There are so many memorable sets being played across the BBC over what would have been our 50th anniversary weekend. Personally, I’m looking forward to a weekend of reflecting on the history of our festival and going back to some classic performances from David Bowie, Adele, REM, Beyoncé, The Rolling Stones, Jay-Z, Billie Eilish and lots more. Me and my dad will definitely be watching!”