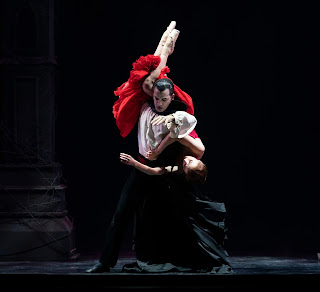 Choreographed by David Nixon OBE, the Northern Ballet's performance of Dracula will be shown on BBC Four this Sunday...

Step into the world of Dracula - if you dare.

Seducing countless generations, Bram Stoker’s legendary vampire lives on in this extraordinary ballet. The dark tale of the immortal Count is played out through Northern Ballet’s blend of sensuous dancing and gripping theatre enhanced by gothic sets and costumes.

If you think you know what to expect from ballet, think again. This is ballet with a dramatic bite that will leave you thirsty for more - don’t miss your chance to experience it.

Dracula was recorded at Leeds Playhouse on Halloween 2019 and streamed live to over 10,000 viewers in cinemas across Europe. Choreographed by David Nixon OBE, it stars Premier Dancer Javier Torres in the lead role. It will now make its television debut at 10pm this Sunday, 31st May, on BBC Four and will be available on BBC iPlayer throughout June as part of their popular Pay As You Feel Digital Season.

Find out more about the performance here.

When theatres closed in March Northern Ballet, along with the rest of the theatre industry, was severely impacted and had to cut their spring tour after just one performance. In response, the Company pledged to keep bringing world-class ballet to their audiences through a new Pay As You Feel Digital Season. To date the season has been watched by over 200,000 people and attracted donations of over £20,000.

The Company is set to face a loss of over £1M in box office income due to COVID-19 which may impact their ability to pay their workforce, many of whom are freelancers, as well as their ability to present new ballets. Whilst theatres remain dark, the Company aims to continue making their performances available online and on TV, encouraging audiences to donate when they watch, if they are able.

Those who wish to support the Company can donate at northernballet.com/pay-as-you-feel

Premièred in 2019, Amaury Lebrun’s For An Instant was part of Northern Ballet’s Three Short Ballets programme and had just 7 performances across Leeds and Doncaster. The full ballet created, by the award-winning contemporary dance maker with Northern Ballet’s versatile performers, is available to watch online until 7 June.

To find out more about Northern Ballet’s Pay As You Feel Digital Season, please visit northernballet.com/pay-as-you-feel