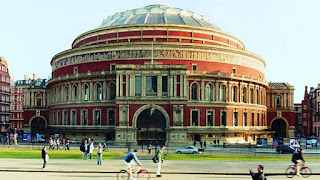 As you know, every year here at AlbieMedia, we highlight some of the concerts we're looking forward to throughout the summer of BBC Proms concerts. As with everything else in 2020, this Proms season is looking a little different...

One hundred and twenty five years on from its creation, the Proms will once again provide a remarkable summer of music, fulfilling founder-conductor Sir Henry Wood’s vision to ‘bring the greatest classical music to the widest possible audience’.

The 2020 season will open on Friday 17th July on BBC Radio 3 and Sunday 19th July on BBC Four with eight weeks of broadcasts on television, radio and online.

The current situation with COVID-19 means the season that had originally been planned is sadly no longer possible. Instead the Proms in 2020 have been re-conceived in a different format, but the aim remains the same – to create the world’s greatest classical music festival by reflecting world class music-making from leading artists around the globe, highlighting emerging talent, and featuring work by some of today’s most exciting and innovative composers.

The 2020 Proms will celebrate the past, reflect on the present and build for the future.

The past will play its part through the unrivalled BBC archive of Proms concerts. From Friday 17th July, BBC Radio 3 will present past Proms concerts every evening, as well as a weekly Late Night Prom, and a Monday lunchtime offering. This will be a once-in-a-lifetime opportunity to reconnect people with concerts and artists from the past, as well as introducing these amazing performances to new audiences.

Joining the celebrations on the opening weekend, BBC Four will then broadcast stand-out Proms each Sunday throughout the festival. Further highlights of TV Proms over the years will also be available on BBC iPlayer for audiences to enjoy this summer.

From Friday 28th August, the focus of the Proms moves from the past into the present with the ambition to have musicians performing live at the Royal Albert Hall across the final two weeks of the season, culminating in a poignant and unique Last Night of the Proms to bring the nation together.

Working strictly within the government advice at the time the hope is to present live performance to be broadcast on BBC Radio 3, BBC Four and iPlayer. The range of work will vary from solo performances to ensemble work and feature some of the greatest musicians of our time alongside emerging talent. A full schedule of events will be revealed nearer the time to take into account the latest government health advice available.

The Proms will also look to the future this summer in a digital Proms season, beginning right at the start of the festival with a unique First Night commission performed by all the BBC Orchestras and BBC Singers. Featuring over 350 musicians, this Grand Virtual Orchestra will see all the groups performing together.

To mark the 250th anniversary year of Beethoven's birth, a new mash-up of Beethoven's nine symphonies has been specially created by Iain Farrington, which will be a spectacular digital springboard for the summer.

Audiences are always at the heart of the Proms, but this year they will play a unique role in helping shape the programme. Radio 3 is inviting listeners to share their favourite ever Proms moments and will take inspiration from these and reflect them on air, making this truly the People’s Proms.

David Pickard, Director BBC Proms, said “These are challenging times for our nation and the rest of the world, but they show that we need music and the creative industries more than ever. This year it is not going to be the Proms as we know them, but the Proms as we need them. We will provide a stimulating and enriching musical summer for both loyal Proms audiences and people discovering the riches we have to offer for the first time.”

Alan Davey, BBC Radio 3 and Classical Music Controller, added “The BBC Proms every year heralds a summer of classical music and this year we will deliver the same joy, inspiration and transformation to peoples' lives that such music brings, albeit in a different way. We’ll be celebrating 125 years of the biggest classical music festival in the world by connecting audiences through a multimedia offering of incredible recorded gems in our Proms Archive, together with audience suggestions of their all-time favourite Prom for our airwaves and a return to the unique magic that real, live music brings in the last two weeks of the festival. The Proms will continue to mean summer for music lovers everywhere.”

Jan Younghusband, Head of BBC Music TV Commissioning, reflected “As the nation unites in these unprecedented circumstances, BBC TV, radio and online all team up to support the Proms’ mission of bringing classical music to as many people as possible. BBC Four and BBC Two will once more hold a unique place in this once-in-a-lifetime cross-platform celebration, providing audiences with the opportunity of enjoying weekly stand-out Proms performances from our precious filmed Archives, leading up to the joyous return of live broadcast concert and a new-style but still glittering Last Night of the Proms on BBC Two and BBC One.”

The BBC Proms on television will be produced by Livewire Pictures and BBC Radio 3 content will be produced by BBC Production for Radio 3. Every archive Proms broadcast will be available to watch or listen live and on-demand on BBC iPlayer or BBC Sounds. In addition there will be specially curated, on-demand music mixes on BBC Sounds and further TV highlights of Proms over the years on BBC iPlayer.