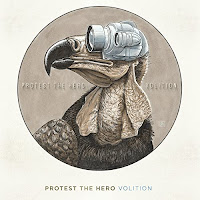 In an effort to further her musical education, Susan Omand has been set "homework" of listening to albums released after the 1980s that she has missed out on. This week's article arrives of its own Volition...

I love this album. No, let me qualify that a bit. I love this album when I am in the right mood for it. It’s a challenging and involved listen and not an album that I’d pick up to wind down, or to cheer up or to have on in the background while I’m doing something else. This is an album to put on and sit between the speakers and just “appreciate” it for a few tracks.

The musicianship and technical ability of the band is absolutely stunning. There’s an almost electronic, robotic sound to the lead guitar, the classical sounding arpeggios are so clean and fast – they positively beep half way through the first track Clarity, it’s like having an R2 unit in the backing band. Their singer, Rody Walker, can actually sing too (once I got over the fact that his voice reminded me of Justin Hawkins from The Darkness (btw this a good thing in my book)), so I’m being very forgiving about the RAAAR this time because it’s not the default and the album tends much more towards the proggy end of the rock spectrum. I love the odd sample that gets thrown in too, like at the start and end of Without Prejudice which took me right back to the black and white Flash Gordon films of old. I also really liked the piano/acoustic ending on Mist, because it was something totally different to the rest of it.

Because, as I said at the start, this is an “appreciate for a few tracks” album. In Volition, I feel that Protest the Hero throw all their cards on the table from the get-go and it’s pretty much more of the same throughout. That’s no bad thing, although the full-on-ness (yes, it’s a word) can be really wearing when you take on a whole album all at once. It’s so demanding of your full attention that it doesn’t fade into the background but there’s also not a lot of variation or experimentation, for me, between the tracks other than the odd spark here and there. I’m not sure I would be able to distinguish one track from the other very easily if I just got played a snippet of it, although that could be because I haven’t listened to the album often yet. Which I absolutely will do when I can spare the time, so you can count me as educated on this one.