Turn That Noise Down – Nick Cave 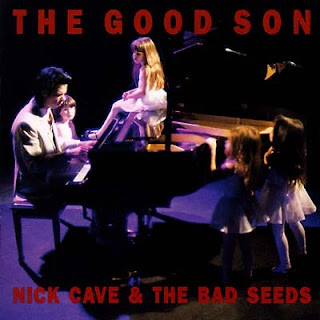 So many well-known albums turn 30 this year and Steve Taylor-Bryant and Susan Omand travel back to 1990 to revisit some of the sounds of their youth that made parents shout "Turn that noise down!" This week, Steve revisits his first experience of Nick Cave and the Bad Seeds…

I have listened to all the albums that contain Nick Cave and, along with Leonard Cohen, he is one of my go-to guys when I need some emotional sustenance. There is something about Cave’s voice, there is something about the music that accompanies the voice, and Cave to me is a storyteller rather than a singer in the traditional sense, he is the around a fire storyteller that just happens to tell his tale with musical stylings. One thing I never really got though was the surprise that I remember in the music press when The Good Son came out. I have vague memories of people being pleasantly surprised as to how calming and tranquil The Good Son was. I didn’t have that shock as The Good Son was my first Nick Cave album. I kind of understand with hindsight why people were shocked but, to be honest, I have always felt moved by Cave throughout all the releases and so it's hard to review The Good Son with the commentary that there was at the time, other than to say it is sort of why I bought the album in the first place because on occasion I am a press whore that will buy something that is being talked about.

All I can really say about The Good Son is that it probably is not every fan's favourite record, but it is mine. It is mine because it came before all else for me, so tracks like Foi Na Cruz which feels dreamlike in places, and Sorrow's Child which is just so evocative, are staples in my listening history. I get a lot from The Good Son, I get musically fulfilled, I get true and proper storytelling and feel like a smart man has educated me through song, I get drums and percussion that speak to the drummer in me, I truly appreciate the orchestral elements, but no matter how good the band or the soundtrack it is always Cave’s voice that drives my emotion.

There are other highlights that are maybe more accessible for listeners on The Good Son but, aside from the ones I have mentioned and The Hammer Song, I would probably only recommend The Weeping Song as your way in to Nick Cave as a new listener.