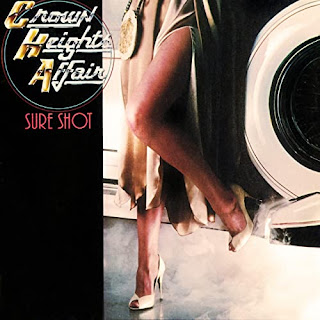 Inspired by our series of articles looking back at music released 30 years ago, Jimmy Hunter takes a step further back in time to give us a Song of the Day 1980. This week, he gives us You Gave Me Love...

On a lighter note than last week but still a departure for the group itself from what had come before, due to a change of producer, this is a record that stroked the back of my neck as soon as I heard the intro [Dear Lord – Ed]. And it still does. This week I’m listening to You Gave Me Love by Crown Heights Affair and it’s a fine example of R&B/disco.

The band had been around since the mid to late ‘60s but came to my attention around 1978 with the release of the Dream World album and the superb single release Galaxy of Love. Much like Earth, Wind & Fire and Kool and The Gang, CHA managed very successfully to bridge the R&B/funk and disco genres and this record demonstrates that. It really benefits from the full 12 inch mix as you get an amazing intro and a fantastic mid-section instrumental and though this structure is the norm, it didn’t always work.

The hook is the bass line [Isn’t it always? – Ed] and that goes all the way through the track but it’s the intro that got and gets me and it only appeared on the 12” (and album) version. Why?? Like the electronic percussion start to Heart of Glass on the album and remix 12” version, it was never on the 7” single release.

Anyway, that gives into a real bassy section and we get the “oo oo oo oooo-oooo” melody and into the first verse. Rooted firmly in the bassline, the melodies float along the top of it but never quite escape it and the production is almost too full-on but for me it always conjures up the hot sweaty dancefloor that I know this record filled. More than any other track on the album (Sure Shot), this record is both laidback and punchy.

The record became a hit in the UK and signalled a change – previously the band had enjoyed great success in the US but for this and the next album, the band was more popular in the UK but after a 2 years break, ultimately broke up.

Here’s the original extended mix for you to have a little quarantine jig to.