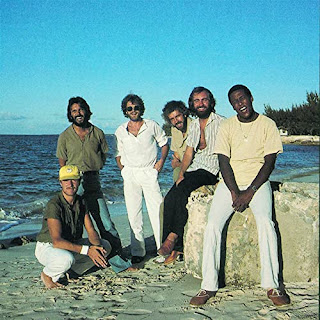 Inspired by our series of articles looking back at music released 30 years ago, Jimmy Hunter takes a step further back in time to give us a Song of the Day 1980. This week, he's going round again...

I’m unashamedly plugging a Dundee connection here, and a personal one too. My cousin’s erstwhile husband was a roadie for this band at one point back in the ‘70s and although I didn’t get to meet the band, I did form a great liking for the music.

This week, we’re spinning [Oh for the love of … Ed] to the sound Let’s Go Round Again by the Average White Band.

What’s not to like? An upbeat record, well constructed and with a great chorus that doesn’t get old or repetitive. In my view at least. An echo on key words in each verse, almost like the sound equivalent of a drop capital letter (no, I know, just leave it OK?) may almost now sound dated but I think they get away with it.

This record was their most successful, commercially, and was always one of my favourite toe-tappers. But the band was much more than this record but sadly really didn’t catch the public’s imagination. Why? Perhaps not interesting enough for Radio 1 producers at the time? For it was them (and others) not the DJs who really influenced the playlists.

If you listen to some of the band’s back catalogue – and if you like your jazz/funk/R&B I’d urge you to seek some out – you may find a number of tracks you recognise. The band released a gaggle of albums over the course of about 12 years or so but this single was remixed re-released in 1994 and introduced a new generation to the delights of what I think is a superb disco/funk single.

And the Dundee connection? Well – answers on a postcard please!

This is a good not TOTP performance so, set your toes to “tap” mode and your hips to “swing”.