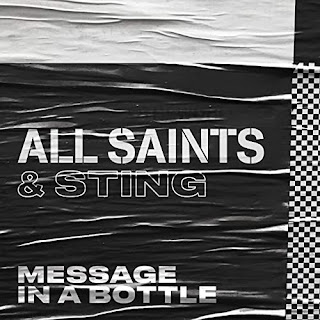 A brand-new version of The Police classic ‘Message In A Bottle’ has been released by Sting... and All Saints? Yes, apparently so. Listen to this...

The single is the first release from All Saints since their critically acclaimed 2018 album ‘Testament’ and the first from Sting since 2019’s ‘My Songs’.

The track sees both artists collaborate with producer Future Cut (Rihanna, Shakira, MIA). Written by Sting for the 1979 Police album ‘Regatta de Blanc’ the track hit No.1 that year and has become one of the band’s most enduring hits, serving as the title for an original West End musical currently running in London’s West End, produced by Sadler’s Wells and choreographed by Kate Prince.

All Saints originally performed ‘Message In A Bottle’ with the BBC Concert Orchestra for Children In Need in 2018. They continued to perform the song during their run of summer festivals the following year and it quickly became a fan favourite.

All Saints have said: “We were in the studio working on a new arrangement of the song for a radio session and we decided to record what we had come up with. We were delighted when Sting heard our original demo and offered to add his vocals to the track."


All Saints have to date sold over 12 million records, had five No.1 singles and won two BRIT awards including Best British Single for ‘Never Ever’. Their No.1 hit ‘Pure Shores’ from the Leonardo DiCaprio film ‘The Beach’ earned band member Shaznay Lewis an Ivor Novello songwriting award. After a 10 year hiatus, All Saints returned in 2016 with the hugely successful album 'Red Flag', which reached No.3 in the Official UK Albums Chart following up with ‘Testament’ in 2018. All Saints continue to sell out headlining tours and festivals across the UK. The band also performed to over half a million people supporting Take That’s ‘Wonderland’ arena tour.

Throughout his illustrious career as a solo musician and a member of the Police, Sting has sold 100 million albums, received 17 Grammy Awards including Song of the Year for "Every Breath You Take", three Brit Awards including Best British Male Artist in 1994 and Outstanding Contribution in 2002, a Golden Globe, an Emmy and four nominations for the Academy Award for Best Original Song. In 2019, he received a BMI Award for "Every Breath You Take" becoming the most played song in radio history. In 2002, Sting received the Ivor Novello Award for Lifetime Achievement from the British Academy of Songwriters, Composers and Authors and was also inducted into the Songwriters Hall of Fame. He was inducted into the Rock and Roll Hall of Fame as a member of the Police in 2003.