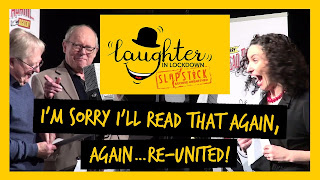 Closing out the 2020 Slapstick Comedy Festival was I’m Sorry I’ll Read That Again, Again starring The Goodies and Steve Taylor-Bryant took his Gibbon in his left hand and, well, hilarity ensued…

“I was quite happy with the Verger, although he’s not a Verger anymore”

We have a long tradition of enjoying funny people and shows in my family. Whilst I grew up in the era of Not the Nine O’clock News and Blackadder and gravitated more towards our cousins across the pond and Saturday Night Live and In Living Colour, I always knew the traditions and the comedians of the past via my parents and their records of shows and old radio broadcasts. I grew up enjoying Spike Milligan, Monty Python, and of course Tim Brooke-Taylor, Graeme Garden, and Bill Oddie as The Goodies. As is the way of our pop culture, these luminaries of the past disappeared from our collective minds, but the ideals of their brand of comedy and songs lived on albeit in different forms. Sadly, though, there is a large proportion of society that have never quite experienced comedy played out in that radio show style that some of the industries greats formed and grew up in and so shows like I’m Sorry I’ll Read That Again that originally ran from 1964 until 1973 aren’t really in the forefronts of modern comedy audiences. Enter Barnaby Eaton-Jones and his cohorts who refuse to let any form of entertainment completely die out and their modern adaptation of the show. When Barnaby et al first brought the show to the stage a few years ago, I bought tickets for my parents to see it in Cheltenham as a gift, knowing they would love reliving the comedy of their younger days, but I never got to attend myself… Until now!

I’m Sorry I’ll Read That Again, Again [hereinafter typed as ISIRTAA because, well, because - Ed] closed out this year's Slapstick Comedy Festival at the Bristol Old Vic, 26 events across 5 days, and this performance was filmed and I am delighted that during #LaughterInLockdown, the Slapstick head honcho, Chris Daniels, and Barnaby have teamed up to put the entire show on YouTube for your delectation. Sadly Tim Brooke-Taylor passed away recently so watching the performance is bitter sweet and I am not sure how Barnaby keeps it together during his introduction filmed just a few days ago in his garden but laughter is what Tim was about and so on with the show.

The core cast of ISIRTAA is Barnaby Eaton-Jones, David Clark, William K. B. Brown, Ben Perkins, and Hannah Boydell and they take us ably, and nearly professionally, through sketch and song with appearances dotted throughout from single or ensemble Goodies. Yes, Tim, Graeme and Bill are in attendance, and we as an audience are taken on a journey through comedy time in the guise of a radio show the BBC are trying to keep clean and non-offensive and here in lies the genius of this style of comedy; it's hard [no pun intended - Ed] to be funny with crudeness but when you get it right it’s the most hilarious thing you’ll ever hear. Being an adaptation of a fifty year old radio comedy show, ISIRTAA is filled with some wonderful old comedy tropes and jokes I think were written at the beginning of time but delivered by a cast not of that generation and with the warmth and fun of their delivery the jokes play like it’s the first time you’re hearing them. During the first half of the show there were many highlights but the Audio Porno Fair segment, and The My Fair Lady Dirty Songbook from the core cast are real standout moments and my word Hannah Boydell’s voice is spectacular! There is also a wonderful bit from The Goodies all playing four-month-old babies and if Bill Oddie crying like a new-born whilst asking mummy for ciggie wiggies does not float your comedic boat then quite frankly I feel sorry for you. Stuff That Gibbon had me crying with laughter, the modern twists with mentions of Trump and Brexit made a fifty year old show relevant and during the hilarious Shakespeare’s Jokes segment, Love Labour's Lost was delivered completely deadpan and landed with laughter. Which brings me to not just the absolute highlight of the first half but of the whole show and that was the ISIRTAA retelling of Macbeth which leads me to believe that if Shakespeare was taught this way in schools then we would have more kids going to the theatre. 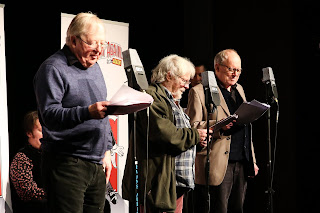 Straight after the interval Slapstick Director Chris Daniels joins the cast for a quick sketch about, well, the interval, and the show is back off and running again with more highlights including The Chartered Accountant song, Professor Prune and the Electric Time Trousers, and the Gardening Yoga Cooking for Beginners sketch that, whilst not my favourite of the night, I certainly think was probably the most clever. When you go to a show that is in essence a tribute to The Goodies and the audience know The Goodies are there, it is the sketches and stories involving those three genius performers that excite the most; during the Moll Flounders sketch, another highlight, we got to see Bill Oddie as Grimbling the Butler who went off script as often as he was on script and he made me cry more tears of laughter, we saw Graeme Garden’s Dick Turpentine delivered with utter smoothness, and the character that got one of the biggest cheers of night, Tim Brooke-Taylor’s Lady Constance which rivalled Barnaby Eaton-Jones bad French Count for character of the night.

The entire show is just under two hours long, but it flies by as joke after joke, fourth wall break after fourth wall break, mistake and off script moment after... you get the picture, hit their mark. It's harder if you are trying to review said show as the laughter and tears mean you are constantly rewinding and pausing so you do not miss anything so just watch it for fun. You may think you do not like radio show comedy, sketch comedy, hilarious songs (although not The Ferret Song because of John Cleese) but I honestly think you will. There are some fantastic individual and ensemble performers, some moments of sheer genius, some really old jokes, and some fresh takes of comedy and, in our lockdown moments of sadness and loneliness, ISIRTAA is the perfect tonic to alleviate some bad feeling. I thank The Goodies for my upbringing, and I thank Barnaby and his crew for allowing me to relive some wonderful childhood moments as a grown up.


After kind permission was received you can watch the entire show below.

You can support the work of Chris Daniels and his team here at Slapstick.org.uk