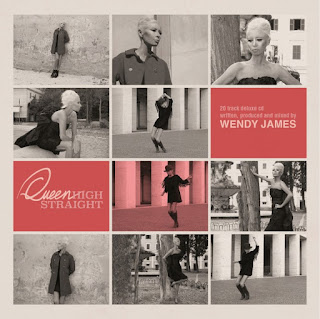 Wendy James has announced a new album, Queen High Straight, coming out in May. Listen to the double A side single, Perilous Beauty/Chicken Street...

Wendy began writing Queen High Straight after a long stretch of writing/ recording/ delivering/touring her previous album ‘The Price Of The Ticket’, which charted in the UK at No.14. Wendy says of the title track, “I gravitated toward some jazzy type of chords which lent a gentle lilt to the song, it sounded smooth and it reminded me of when I was a young child listening to Sergio Mendes ‘Brazil ’66’! Some of those lovely chord progressions, some of that lovely harmonizing the singers did and of course Bacharach and David.”

“Overall, my taste and style have not changed with time,” Wendy says. “The music that excites me now, ultimately, is the same as when I was starting out songwriting and back through my days in Transvision Vamp. I continue to marvel at Lou Reed and The Velvet Underground, I continue to be blown away by The Stooges, I continue to be everlastingly enthralled by Bob Dylan, but of course, the older one gets the more one discovers and I am now informed more cohesively and fully by all the music, new and old, which settles into my consciousness.

“My track listings are never altered from the order in which I write the songs, maybe it’s because it’s too tangential for me to try to shuffle songs around but really I think, in some kind of holistic way, the order in which the songs are written must surely be the very most natural order for them to be listed in. Around about song 14 ‘Bliss Hotel’ I hit a wall. I did not know where the inspiration was going to come from! But then somehow, miraculously, it comes again and one pushes on through, as it turned out, to some of my favourite songs on the entire album. My perfect moment? song 18 ‘Cancel It… I’ll See Him On Monday’; it was a ‘Eureka’ moment. I ran out into the garden and started dancing, “I’ve got it! I’ve got it!!!”

Elsewhere on the album, Wendy embraces Motown with ‘Here Comes The Beautiful One’ and ‘Little Melvin’, she returns, once again, to her favourite guitar guttural filth and sex for ‘Perilous Beauty’ and an unlikely sounding love song in ‘Chicken Street’, 90’s pop groove in ‘Ratfucking’, melancholia in ‘Testimonial’, Django Reinhardt whimsy in ‘I’ll Be Here When The Morning Comes’. On ‘The Impression Of Normalcy’, Wendy says, “Thanks to James Sclavunos, who told me to “speed the fucking song up”, I have a proper speed punk song.” Finally, track 20 ‘Kill Some Time Blues’ is the ultimate 60’s girl group number.


Wendy recently toured the UK with her permanent band The Wendy James Band opening for The Psychedelic Furs, which was a huge success. Details of her new, rescheduled, 19-date tour are below…

Tickets available via: https://thewendyjames.com/live/
Email ThisBlogThis!Share to TwitterShare to Facebook