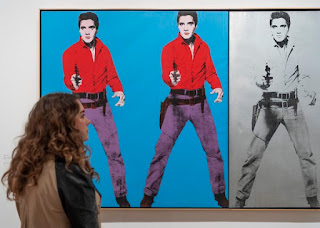 Tate Galleries have announced the upcoming release of two new films offering audiences the chance to step inside their latest Andy Warhol and Aubrey Beardsley exhibitions and explore remarkable works of art from the comfort of their own homes...

Published on Tate’s website and YouTube channel this month, viewers around the world can enjoy free curator-led video tours of the much-anticipated Andy Warhol and Aubrey Beardsley exhibitions. Specially recorded following the closure of Tate’s galleries due to coronavirus, but before current restrictions were implemented, the films offer unique perspectives from Tate experts as they take visitors through the empty galleries, allowing special access to major art works on loan from public and private collections across the globe.

Available to view online from Monday 6th April, the Tate Modern team of Gregor Muir, Director of Tate’s Collection of International Art, and Fiontán Moran, Assistant Curator, share behind-the-scenes insights into the gallery’s recently opened Andy Warhol exhibition. Featuring over 100 works from across the artist’s extraordinary career, the show sheds light on how Warhol’s experiences shaped his unique take on 20th century culture, emphasising recurring themes around desire, identity and belief that emerge from his biography.

The film is accompanied by a wealth of new exhibition-related content on www.tate.org.uk allowing visitors to delve even further into Warhol’s life and work. This includes articles exploring the artist’s relationship with his mother Julia Warhola, the story behind his lesser-known series of Ladies and Gentlemen paintings, and a personal take on the artist from his close friend Bob Colacello. Further recently released Warhol-themed content includes ‘The Art of Persona’ podcast, discussing the role personas can play in life and art through conversations with artists, performers and DJs, while a ‘How To’ video teaches fans how to recreate Warhol’s printing methods used to make iconic works of art such as Marilyn Diptych 1962 and 100 Campbell’s Soup Cans 1962. This is the latest in a series of creative, instructional ‘How To’ videos available to view for free on Tate’s YouTube channel, inspired by artists such as Anni Albers, Frank Bowling and Rachel Whiteread. Two new videos ‘How to Draw like Paula Rego’ and ‘How to Make a Pot like Grayson Perry’ will be released in the coming months as Tate continues to provide opportunities for people to experience art and stay inspired while galleries are closed.

Launching on Monday 13th April, the Tate Britain team of Caroline Corbeau-Parsons, Curator of British Art 1850-1915, and Alice Insley, Assistant Curator of Historic British Art, guide a new online tour through Tate Britain’s Aubrey Beardsley exhibition, providing insight into the artist’s brief but astonishing career. Although he died tragically young at the age of just 25, Beardsley’s strange, sinuous black-and-white images have continued to shock and delight for over a century. Bringing together 200 spectacular works – the largest grouping of his original drawings in over 50 years – viewers will be able to see his unrivalled skill as a draughtsman in exquisite detail. The video will join further exhibition-related content available on Tate’s website, including an illustrated exhibition guide and a short film in which historian Stephen Calloway and drag performer Holly James Johnston discuss Beardsley, drag, gender and the joy of being a dandy.